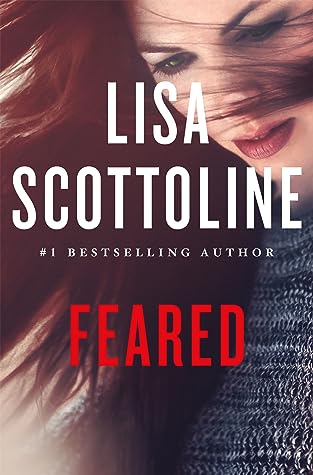 I have been a big fan of the legal thrillers penned by Lisa Scottoline and this one was an enjoyable read, as I expected. It was not one of the best in the series, but it was still a fun visit with the ladies and gentlemen of Mary DiNunzio’s world. In this book Nick Machiavelli has sued the three partners of the law firm for sex discrimination. The one male lawyer in the firm, John Foxman, causes issues when it is revealed that he is looking for a job elsewhere and that he feels uncomfortable working at a firm of all women. Mary and Nick have had problems in the past and the ladies are sure this is personal, and that he has manufactured the suit. It is up to them, particularly Mary, to figure out what is going on. When a death occurs, it ramps up the immediacy of solving this case.

One of the things I love about these books is Mary’s neighborhood, with all the characters, friends, her parents and other neighbours. It is a huge, Italian group where they may not be related by blood, but they are related by love. The nicknames are priceless. Mary is pregnant and due to deliver any day when this case hits, and the concern and nosiness is fun and refreshing. It reminds me a lot of the family in “My Big Fat Greek Wedding”, except that they’re Italian. Mary, Benny and Judy are great colleagues. Benny is not that friendly with the others, but Mary and Judy have a special relationship and that buoys both ladies up when they are in trouble. They are also smart, tenacious and loyal to one another which makes for a great firm. The case is solved in an unconventional and unexpected way, with the reason behind the suit not being what anyone thought is was. Overall, Feared is a fun, easy to read, legal thriller with colorful characters that had me laughing out loud at the humor. Although you can read this book as a standalone, I recommend that you start at the beginning so you don’t miss any of the fun.

When three men announce that they are suing the Rosato & DiNunzio law firm for reverse sex discrimination—claiming that they were not hired because they were men—Mary DiNunzio and Bennie Rosato are outraged. To make matters worse, their one male employee, John Foxman, intends to resign, claiming that there is some truth to this case.

The plaintiffs’ lawyer is Nick Machiavelli, who has already lost to Mary once and is now back with a vengeance —determined not to not only win, but destroy the firm. It soon becomes clear that Machiavelli will do anything in his power to achieve his end…even after the case turns deadly. The stakes have never been higher for Mary and her associates as they try to keep Machiavelli at bay, solve a murder, and save the law firm they love…or they could lose everything they’ve worked for. Told with Scottoline’s trademark gift for twists, turns, heart, and humanity, this latest thriller asks the question: Is it better to be loved, or feared…

Feared, the sixth entry in the acclaimed Rosato & DiNunzio series, expertly explores what happens when we are tempted to give in to our own inner darkness.

Follow Carla Loves To Read on WordPress.com
Join 2,612 other followers