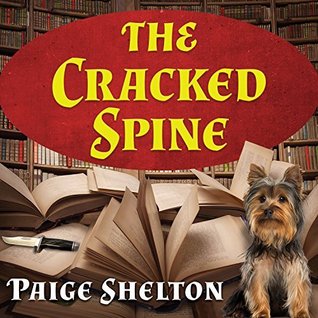 After reading book #3 in this series, I wanted to go back and read the first two to find out what I had missed. I am glad I did, as I enjoyed this story very much. Delaney Nichols has lost her job in Kansas, so applies for a job and gets it working in a rare bookstore in Edinburgh Scotland. Soon after arriving, her new boss’s sister is killed. There is also a missing First Folio of Shakespeare’s work. It seems these are probably connected and both her boss or a fellow employee are being questioned. Delaney is caught up in the mystery, and does a little sleuthing to find the killer and the missing folio.

Having visited Scotland a year ago, I loved the references to places that I had been to and seen. The setting was interesting and well described. The characters were easy to connect with, especially Delaney. She is a great protagonist, smart, friendly and quick thinking, although she could be a bit nosy and pushy at times. There is also a handsome male who looks good in a kilt, that may turn out to be a love interest in future stories. The story is well written, the pace flowing well and the mystery tricky. I love when there are a lot of red herrings and twists so I can’t figure out the culprit and this book fit the bill perfectly. This is a nice character driven story that I enjoyed.

I listened to the audio book of this story from Hoopla. The narrator, Carrington MacDuffe, does a great job of performing the story. She switches between accents quickly and smoothly, as well as mastering the thick or stronger brogues. I was able to identify the various characters by their voice and that made the story very enjoyable for me. I recommend this one to cozy mystery lovers.

About the Book: In need of a good adventure, Delaney Nichols takes the leap and moves to Edinburgh, Scotland to start a job at The Cracked Spine. She doesn’t know much about what she’s gotten herself into, other than that the work sounds exciting, and that her new boss, Edwin MacAlister, has given her the opportunity of a lifetime. Edwin has promised that she’ll be working with “a desk that has seen the likes of kings and queens, paupers and princes,” and Delaney can’t wait to get started.

When she arrives, she meets her new Scottish family; also working at the Cracked Spine are Rosie, perpetually wrapped in scarves, and who always has tiny dog Hector in tow; Hamlet, a nineteen-year-old thespian with a colored past and bright future; and Edwin, who is just as enigmatic and mysterious as Delaney expected. An unexpected bonus is Tom the bartender from across the street, with his piercing eyes, and a rolling brogue — and it doesn’t hurt that he looks awfully good in a kilt.

But before she can settle into her new life, a precious artifact — a previously undiscovered First Folio of Shakespeare’s plays — goes missing, and Edwin’s sister is murdered, seemingly in connection to the missing folio. Delaney decides to do some sleuthing of her own, to find out just what the real story is behind the priceless folio, and how it’s connected to the tragic death, all without getting harmed herself.