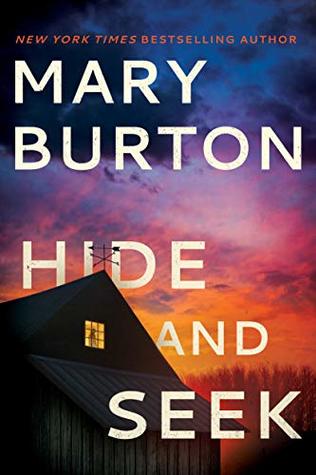 Hide and Seek is the first in the Criminal Profiler series by Mary Burton, yet we met Macy Crow in a previous book. This is a romantic suspense story, but it is a strong thriller/mystery, with not as much emphasis on the romance, which I thoroughly enjoyed. The book opens with a barn being demolished by a reclamation crew, but they find more than they bargained for. They locate the bones and backpack of a high school girl who went missing fifteen years before. Sheriff Mike Nevada, a retired FBI agent, realizes that he needs help and calls the FBI. Agent Macy Crow was seriously injured in a previous investigation and her previous position is no longer available. She has worked hard to heal and is now trying to get a spot on the FBI’s elite profiling team so she can get back out into the field. When the request comes in from Mike Nevada, she is sent to help out as a trial. It seems, they have been involved in the past, both professionally and romantically, which allows the author to add that romantic suspense she does so well.

I really like the character of Special Agent Macy Crow. She is very smart and has the ability to  see connections that others miss. She is tenacious, and will not give up, even working through the pain of her injuries from the hit and run she was the victim of in a previous story. She works hard to prove herself and solve this case for all the victims in the past and present. Mike Nevada is also a great character. He has returned home to Deep Run, Virginia, after resigning from the FBI. He is also smart and was a previous profiler who ended up running for Sheriff when he realized the previous sheriff was not doing a good job. Mike and Macy work very well together and it is obvious they know one another well. Mike is aware of Macy’s limitations and supports her without making her feel weak. There is one sex scene that takes a bit away from the suspense, but it is not off-putting. The killer is also smart and has had many years to develop his skills. He graduated from rape to kidnapping, rape and murder and he is back. He leaves clues at each scene, including DNA, but has never been caught, so is a bit cocky which causes him to take some chances. He is a character that we love to hate and was very well written. The secondary characters in this book are not just supporting, but they are an integral part of the story. They all have secrets that need to come out and had me feeling for them as well.

I read this book in one day, not wanting to put it down. The investigation was gripping and had me on the edge of my seat waiting to find out who this depraved, cocky killer was. The pace of the story was perfect, with the climax having me ignore the many jobs I should have been doing. Of course there is danger, intrigue, suspense and romance all rolled together to make this a great story and wonderful start to this series. I definitely recommend this book. The publisher generously provided me with a copy of this book upon request. The rating, ideas and opinions shared are my own.

Special Agent Macy Crow is a survivor. After a vicious hit-and-run nearly kills her, she gets right back to work, and now she’s gunning for a spot on the FBI’s elite profiling team. As an audition, she offers to investigate the recently discovered bones of Tobi Turner, a high school girl who disappeared fifteen years ago.

While investigating with local sheriff Mike Nevada, a former colleague and onetime lover, Macy discovers a link between Tobi’s case and several others that occurred around the same time as her disappearance. As Macy interviews victims and examines old cases, she uncovers a sinister picture of a stalker who graduated to sexual assault—and then murder.

Macy and Nevada race to put this monster behind bars before he can come out of hiding. But the murderer’s had years to hone his skills, and soon Macy herself becomes a target. She’s no stranger to pain and terror, but will Macy’s first profiling case be her last?