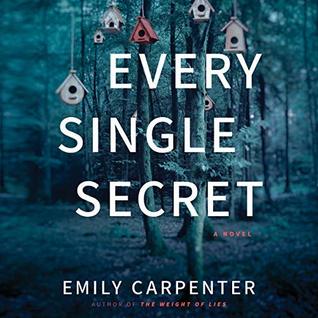 Emily Carpenter is quickly becoming an author that I will watch for. I have enjoyed her psychological thrillers, but I need to be prepared for that huge twist that has come in all of the books I have read by her. The story begins with the main characters Daphne and Heath keeping every single one of their secrets a secret, even from one another. It seems that Heath’s secrets are giving him nightmares and he wants to go on a retreat where he will have some counselling. Daphne agrees to go, but refuses to participate in the counselling. For an engaged couple this seems odd, but Heath agrees. The setting of the old house where the retreat takes place, adds to the suspense and creepiness, giving it a bit of a gothic feel. Knowing that they are being taped while in their rooms and on the grounds was another warning bell for me and Daphne was also very uncomfortable. Will Heath be able to convince Daphne to participate in counselling to help their relationship?

This book grabbed me right from the beginning. I wasn’t sure about either of these characters. They were both hiding so much and didn’t seem willing to share with one another. As we learn about their pasts through flashbacks and sessions, I was still not sure what to believe. Talk about unreliable narrators. As both Heath and the doctor tried to trick Daphne into revealing her secrets, the other guests seem to disappear. What is really going on in this house? Just as I thought I had things figured out, there was a huge twist that left my jaw hanging. I was racing through this story to find out what was going on and would Daphne and Heath come out of this situation as a couple or even as whole individuals. You will have to be able to suspend belief during parts of this story, which I was, as it is fiction. Another great and thrilling read from Emily Carpenter. I think I was so taken in by this story because I listened to it through the KU read and listen option. The narration was wonderful and added that extra bit of suspense to my enjoyment of the book. I will continue to look for books by Emily Carpenter as well as those narrated by Kate Orsini.

About the Book: In this harrowing psychological thriller, a young couple must save their relationship by doing the unthinkable: sharing their darkest secrets…

Emotionally guarded Daphne Amos always believed she’d found a kindred spirit in her fiancé, Heath. Both very private people, they’ve kept their pasts hidden from the world, and each other, until Heath’s escalating nightmares begin to put an undeniable strain on their relationship. Determined to give their impending marriage the best chance of succeeding, Heath insists that Daphne join him on a seven-day retreat with Dr. Matthew Cerny, a psychologist celebrated for getting to the root of repressed memories. Daphne reluctantly agrees—even though the past is the last place she wants to go.

The retreat’s isolated and forbidding location increases her unease, as do the doctor’s rules: they must relinquish their keys and phones, they’ll be monitored at all hours by hidden cameras, and they’re never to socialize with the other guests.

One sleepless night, Daphne decides to leave her room…and only then does she realize that the institute is not at all what it seems—and that whatever’s crying out from Heath’s past isn’t meant to be heard. It’s meant to be silenced.