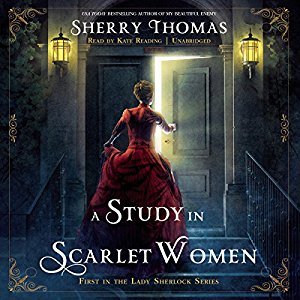 With her inquisitive mind, Charlotte Holmes has never felt comfortable with the demureness expected of the fairer sex in upper class society.  But even she never thought that she would become a social pariah, an outcast fending for herself on the mean streets of London.

When the city is struck by a trio of unexpected deaths and suspicion falls on her sister and her father, Charlotte is desperate to find the true culprits and clear the family name. She’ll have help from friends new and old—a kind-hearted widow, a police inspector, and a man who has long loved her. But in the end, it will be up to Charlotte, under the assumed name Sherlock Holmes, to challenge society’s expectations and match wits against an unseen mastermind.

I had read many reviews and recommendation of The Lady Sherlock series, so decided that I would try one. I listened to this book and although the narrator did a good job, with her accent, I did not enjoy it as much as I though. I still loved the story, but will probably read the rest of them.

25 year old Charlotte Holmes is not interested in the same things as her contemporaries in 18th century London. She does not wish to marry so she devises a plan to stop the proposals. The plan goes terribly wrong and results in her rejection by polite society as well as destroying the name Holmes. Trying to survive, she meets a mysterious, older woman who hires her as her paid companion. After writing a letter to the newspaper as “Sherlock Holmes” commenting on the mysterious death of a wealthy man and linking it to two other sudden deaths of noble women, the case is reopened. Along with her benefactor, Mrs. Watson, and Lord Ingram, a childhood friend, she aids a young Police Inspector in solving the deaths of the three when it appears that none of them are remotely related.

I loved the character of Charlotte and how she handled her alter-ego Sherlock. It is hard to communicate as Sherlock, when he doesn’t exist. She is smart, deductive, observant and able to puzzle out things others overlook. The chemistry between her and Lord Ingram is promising and I hope it’s developed further. Mrs. Watson is also a force to be reckoned with and is a good mentor to Charlotte as she grows in to her new persona. She is the one who puts up the money for Charlotte’s endeavour and convinces her that this can provide her with a living. The secondary characters were also very interesting in their own rite. I like her sister, but her overpowering mother is easy to dislike, even though she is only living as expected during the time. I enjoyed the twists and turns in the plot and how it all came together at the end. Overall, I enjoyed the gender switch of Sherlock Holmes, but there’s so much more than that. This novel gently subverts many of the misogynistic themes found in books set in this time period. It is not preachy, but a fun read and I will definitely continue with this series.

About the Author: Because actual world domination is too much trouble, USA Today-bestselling author Sherry Thomas decided that her goal is life is to write every kind of book she enjoys reading. Thus far she has published romance, fantasy, mystery, and a wuxia-inspired duology. Her books regularly receive starred reviews and best-of-the-year honors from trade publications, including such outlets as the New York Times and National Public Radio. She is also a two-time winner of Romance Writers of America’s prestigious RITA® Award.

And by the way, English is her second language.