Until the Day I Die by Emily Carpenter 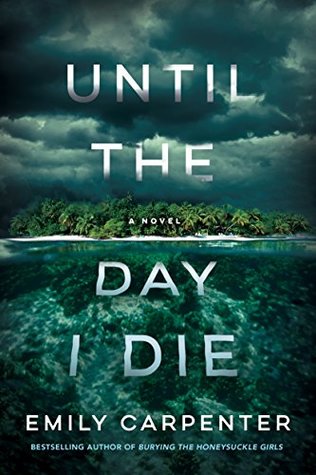 Until the Day I Die by Emily Carpenter

If there’s a healthy way to grieve, Erin Gaines hasn’t found it. After her husband’s sudden death, the runaway success of the tech company they built with their best friends has become overwhelming. Her nerves are frayed, she’s disengaged, and her frustrated daughter, Shorie, is pulling away from her. Maybe Erin’s friends and family are right. Maybe a few weeks at a spa resort in the Caribbean islands is just what she needs to hit the reset button…

Shorie is not only worried about her mother’s mental state but also for the future of her parents’ company. Especially when she begins to suspect that not all of Erin’s colleagues can be trusted. It seems someone is spinning an intricate web of deception—the foundation for a conspiracy that is putting everything, and everyone she loves, at risk. And she may be the only one who can stop it.

Now, thousands of miles away in a remote, and oftentimes menacing, tropical jungle, Erin is beginning to have similar fears. Things at the resort aren’t exactly how the brochure described, and unless she’s losing her mind, Erin’s pretty sure she wasn’t sent there to recover—she was sent to disappear.

Erin is a recent widow and is still grieving. When her daughter, Shorie heads off to college, she is at a loss. She decides that she wants to sell the company that her husband started, but not everyone involved in it agrees. When she turns up at her daughter’s college, drunk and behaving erratically, her family and close friends stage an intervention. They end up sending her to a spa/rehab centre on a remote island to rest and regroup. Even though Shorie does not want to go college but work at the company founded by her parents, she heads back. Once she is at school and Erin is at the spa, things start to happen. Shorie does some investigating of company activities on her own, and Erin realizes that she might not be at the spa to recover.

This story is told from two POVs, Erin and Shorie. I liked both of these characters and both were in very different places and had different goals. Erin is grieving, working too much, and doesn’t seem to be able to take care of herself. Shorie is smart and resourceful, and wants to work at her parent’s tech company rather than go to college. Erin and Shorie love each other, but have a very strained relationship. It is her mother that has pushed her to go to college.

The thriller part begins on the island and it what happens if unexpected and somewhat implausible. This book combines a mystery at a tech company and a perilous island experience. My biggest complaint about this book was that it was not as realistic as I would have expected based on other books I have read by Emily Carpenter, as well as the fact that is seemed a bit disjointed to me. Overall, a wild, mysterious, story that took off for the last third of the book. I enjoyed it and will read more by this author, but this is not my favourite one by her. The publisher generously provided me with a copy of this book upon request. The rating, ideas and opinions shared are my own.

About the Author: Emily Carpenter is the bestselling author of three thrillers, Every Single Secret, Burying the Honeysuckle Girls, and The Weight of Lies. A graduate from Auburn University with a bachelor of arts in speech communication, Emily has worked as an actor, producer, screenwriter, and behind-the-scenes soap opera assistant for CBS TV. Raised in Birmingham, Alabama, she moved to New York City for a little while to pursue her career before moving back to the South. She now lives in Atlanta, Georgia with her family. Visit Emily at www.emilycarpenterauthor.com and on Facebook, Twitter, and Instagram.

10 thoughts on “Until the Day I Die by Emily Carpenter”