The Sins of the Sire by Emily Royal

Book 1 in the Dark Highland Passions series. Each book will be standalone with a loose connection to the others

Two years ago, English noblewoman, Elyssia De Montford, risked her life to free the Highlander held prisoner by her sadistic fiancé. She cannot forget the man who first stirred her heart–a memory that burns anew when she finds herself once more on the road to Scotland.

Tavish MacLean has sworn vengeance. It’s been six years since his beloved sister was raped and murdered by an English lord, a tragedy which almost destroyed his family. On his deathbed, his father demanded retribution and Tavish pledged before his clan to enslave the lord’s daughter then send her back to her father, pregnant with a Scottish bastard. When he learns that she is travelling north, he seizes his opportunity and orders her abduction.

But when his men fling the prisoner before him, Tavish recognises Elyssia, the woman who once saved his life. Loyalty to his clan trumps the debt he owes her and he claims Elyssia as his captive. Though she’s one of the hated English, her willing body ignites passion in him at night, though she fights him at every turn during the day. As time passes, he questions his loyalty, finding himself increasingly enthralled by his fiery captive.

Treachery surrounds Clan MacLean. When long-buried secrets come to light, Tavish must risk his life and his clan, or all that he holds dear will be destroyed.

Potential Trigger Warnings: Quite dark. Torture and Rape (The descriptions aren’t graphic and not described in detail but it’s clear what’s going on.)

This story takes place during the Scottish/English wars in medieval times. Elyssia is the daughter of an Earl, who uses her to gain an alliance. He has betrothed her to a wicked, sadistic man who has captured a Scottish Laird and is torturing him and using him for entertainment. When barbarians attack his fortress, Elyssia is able to release him from the dungeon and they escape. Three years later, they come face-to-face in a very different situation. With his family and clan wanting to exact revenge on Lord de Montford, Tavish MacLean realizes the woman his men have brutalized is Lady Agatha de Montford, also known as Elyssia.

This story has several characteristics of a bodice ripper. The two main characters Elyssia and Tavish have that magnetic attraction to one another, but fight it for various reasons. Elyssia is a strong woman in so many ways, yet her weakness is her sister, Alice. She is slow and gentle, as well as suffering from seizures. Elyssia has vowed and promised to protect her at all costs, so often acquiesces when I want her to fight, if she views Alice being in danger. Tavish is a tarnished hero. He hates what has happened to Elyssia, but he is harsh and not gentle with her, even though he loves her. He is a character that I loved, hated, loved, hated and so on. He is loyal to his clan and family, as well his betrothed, who is actually not the refined woman she pretends to be. Sweet Alice is the one character that redeems them all. I loved the setting of the Scottish Highlands. The peace it brought to the characters is understandable after visiting there recently and seeing the beauty.

This story is very fast paced. There was so much happening that I read it quickly wanting to know what was next for Elyssia and Alice. The Highlanders were depicted as people who hated the English for what had happened to them, but were able to love Elyssia and Alice eventually, based on who they were individually rather than hate them for being English. The suspenseful scenes are well-written, and while difficult to read, are riveting. Be prepared, however, for the violence. I was not ready for that based on the synopsis of this book, which is why I classified it more as Historical Fiction, Adventure and Suspense than Romance. If you enjoy Romance that takes place during the tumultuous Middle Ages and are ready for some violence and a lot of action, then this is the book for you. It appears to be the first in a series, so I am interested to see where Emily Royal goes with her next story. I received a copy of this book from Rachel’s Random Resources upon my request. the rating, ideas and opinions shared are my own. 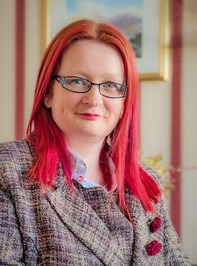 About the Author: Emily Royal is a mathematics geek who grew up in Sussex, UK and has always had a passion for romance and strong alpha heroes. After graduating from Oxford University and enjoying a brief dream of becoming an airline pilot, she started a career in financial services in order to indulge her love of mathematics.

She now lives in rural Scotland with her husband, two daughters, and a menagerie of pets including Twinkle, an attention-seeking boa constrictor. She reignited her passion for romance when she joined the Romantic Novelists’ Association under their New Writers’ Scheme.

When not working on algebra or keeping Twinkle from slithering over the keyboard, Emily enjoys painting and playing the piano. She can often be found wandering about the hills of Scotland looking for inspiration.

Giveaway #2 – notebook + 2 Scottish coasters (International)
So long as you are on Emily Royal’s mailing list by 10th May when the draw is happening, you will be eligible to win.

One thought on “The Sins of the Sire by Emily Royal,@rararesources @eroyalauthor”