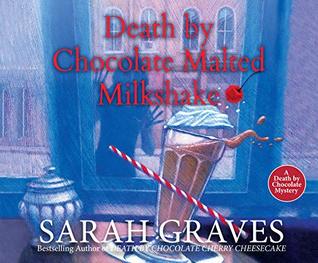 About the Book: The island fishing village of Eastport, Maine, has plenty of salty local character. It also has a sweet side, thanks to Jacobia “Jake” Tiptree, her best friend Ellie, and their waterfront bake shop, The Chocolate Moose. But when island life is disrupted by the occasional killer, Jake and Ellie put their chocolate treats aside to make sure justice is served.
This summer, Eastport’s favorite lovebirds, kindergarten teacher Sharon Sweetwater and Coast Guard Captain Andy Devine, are getting married. The gala reception is sure to be the fête of the season, especially with a wedding-cake-sized whoopie pie courtesy of The Chocolate Moose. For Jake and Ellie, the custom-ordered confection will finally reel in some much-needed profits. But the celebratory air, and sweet smell of success, are ruined by foul murder.

When Sharon’s bitter ex-boyfriend Toby is poisoned with an arsenic-laced milkshake, Andy is jailed as the prime suspect and the wedding is cancelled, whoopie pie and all. Then Sharon makes a shocking confession—one that sounds like a fishy attempt to get Andy off the hook. Now both the bride and groom are behind bars. And with the fate of The Chocolate Moose at stake, it’s up to Jake and Ellie to catch a poisonous predator before someone else sips their last dessert.

Jake and Ellie are partners in the Chocolate Moose. The store is in trouble and if they don’t get more business, they are in danger of going under. They get a job for a wedding cake that will help them out, but when there is a murder in town, the groom and then the bride are arrested for the murder. If the girls can not free them, all the money they spent on ingredients will be lost. As well, it appears that the murder weapon was a poison laced milkshake from the Chocolate Moose. The girls need to clear their friends as well as their business.

One of the things I enjoy about this series is that the characters are quite real to me. Running a business is tough and they need to pinch pennies and work hard for every cent. They are both happily married, so there is no romance of love triangles. Ellie’s husband has had to travel for a job and left her and their daughter home. This is a difficult situation, and they are considering having to move. Bob Arnold, the local police chief is always incredibly patient with their snooping. He never threatened to toss them in jail, but he seemed genuinely concerned for their well-being. Set in a small town, this is somewhat believable, but we all know police want to solve their own crimes. Finally, there is Jake’s dad. He is a feisty, aging hippie who is recovering from a recent heart attack. He wants to be independent and does not want to be babied. He bought himself a new truck and zips around town sticking his nose into other’s business. He is a hoot and I hope I am like him when I get to that age. The pace of this story varies. There are some slow spots, but overall it is a good story, with some tense and exciting times. I did not figure out the killer until the reveal, so that always makes a good mystery for me. I listened to the audiobook and enjoyed the narration of this story. I have come to enjoy Susan Boyce’s voice when reading cozies and will listen to more that she narrates.

About the Author: Sarah Graves lives with her husband John, a musician and luthier, and their black Labrador Retriever in a house very much like the one Jacobia Tiptree is remodeling in Eastport, Maine. When she’s not writing Jake’s adventures, Sarah works with her husband on the house and she plays the 5-string banjo. Website: http://www.sarahgraves.net/

About the Narrator: Susan Boyce is the award-winning narrator of over 140 audiobooks. She performs in variety theater, is one half of the song-and-dance team of Jones & Boyce, and holds a degree in theater and biology. Susan can be heard in phone trees, in computer games, and as the voice of the pink “Care Bear.” She lives in St. Augustine, Florida, and summers in Greenville, Maine.

“My job is to respect and embrace the author point of view, make it live and let it sing.”