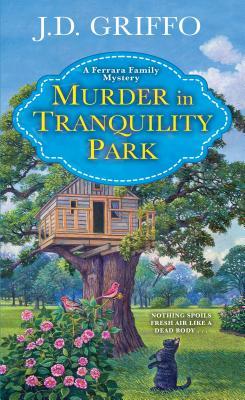 About the Book: Alberta Scaglione and her twentysomething granddaughter, Jinx, love to spend time—and solve crime—together . . .

Ever since Alberta Scaglione inherited her spinster aunt’s Cape Cod cottage, she’s been enjoying the good life in Tranquility, New Jersey, with her black cat, Lola. But since things are mostly quiet in this town, she finds other things to do—like joining Jinx for morning jogs in Tranquility Park. She has to do something to stay healthy, as long as it doesn’t involve Jinx’s healthful tofu sausages and gluten-free pasta. But when they stumble across a treehouse hidden in the trees, and a dead body underneath it, they take a detour into solving a murder. Now the Ferrara ladies will have to exercise extreme caution to avoid a permanent decline in their health . . .

Murder in Tranquility Park is just as much fun as Murder on Memory Lake, the first book in this series. The Ferrara Family are a hoot. A huge Italian family who stick together through thick and thin. After solving a murder, they have decided that they are a detecting agency and are all set to solve other crimes. I love Alberta and her granddaughter Jinx. They are great friends as well as relatives. Jinx has convinced Alberta to start taking care of herself, so out running one morning they stumble upon their next case. In Tranquility Park, under a tree house, they find a body. It looks like he died from an accidental fall, but Alberta’s great observation skills open up the very real possibility that it was a murder.

I love how Alberta, her sister Helen, sister-in-law Joyce and Jinx all work together when there’s a murder. This family is quite interesting as well as smart. You have a reporter, ex-nun, and a lawyer. They are a quirky group, and are they tenacious. In this book, Jinx’s boyfriend Freddy and Alberta’s boyfriend Sloan also get involved in the investigation. We meet some new characters as well as some familiar ones. Police Chief, Vinnie, once again allows the Ferrara family some leeway in investigating. When he was young, Alberta babysat him, so they had a relationship from the past. The plot was well-developed and the pace was quite quick. I was pretty sure I had figured out who the murderer was, but with one final twist, I was blown out of the water. The ending was quite tense and surprising. Having said all that, I really enjoyed this story. This was a very quick read that I enjoyed right from the beginning. If you enjoy a cozy with quirky characters, a quick story with a great mystery and ending, then pick up this book or the first in the series. I am sure you will enjoy it. The publisher generously provided me with a copy of this book upon request. The rating, ideas and opinions shared are my own.

About the Author: J.D. Griffo a pseudonym used by Michael Griffo. He is an award-winning writer and a graduate of New York University. He has studied at Playwrights Horizons and Gotham Writers Workshop, and has written several screenplays.

Michael Griffo has written 11 novels and over 25 plays and screenplays. His debut novel, Between Boyfriends, was published by Kensington Books in 2010, and was followed by a novella, Missed Connections, in the anthology Remembering Christmas, both written under the pseudonym Michael Salvatore. His latest novel, Murder on Memory Lake, is written under the pseudonym J.D. Griffo and is the first entry in a new cozy mystery series—A Ferrara Family Mystery. It’s The Golden Girls meets Nancy Drew with an Italian twist and will be published by Kensington Books in 2018.

Check out his website at http://michaelgriffo.com/ for all his books and upcoming news.