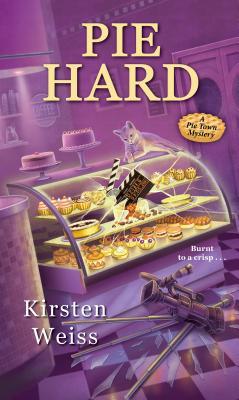 Pie hard is the third book in the Pie Town Mystery and I am still enjoying this series very much. Val Harris owner of Pie Town, a bakery specializing in pies in San Nicholas California, has more than one surprise in store. First she finds out that a group of “goddesses” are having their yearly retreat in a yurt that has been dropped off on her property, then that her pastry chef, friend and landlord, Charlene has submitted her name to be featured on an episode of Pie Hard. Pie Hard is a reality-based show that promises to turn businesses into instant successes. When the TV producer plunges or is pushed to her death, Val can’t help but suspect foul play. The second mystery is regarding the mystery man, who is now the new producer for the show. There is something about him that Val thinks is familiar, but she can’t put her finger on it. When a second murder involving Pie Town occurs, Val knows she needs to get to the bottom of things fast, before it affects her business.

This is a solid cozy mystery with quirky, likable characters and a dash of suspense. I really enjoyed the various mysteries within this story. Val has plenty of clues to sift through along with several suspects. The story is well-plotted with enough twists and clues that I was left guessing right up until the reveal. The family storyline was really interesting and I am curious to see if that will impact future offerings in this series. I would be remiss if I did not mention Charlene. She is not the MC, but I love every appearance of her in the stories. She is quirky, humorous, and jumps right into everything with both feet. Val has no choice but to follow along. I highly recommend this fun, light, entertaining book to cozy mystery fans. The publisher generously provided me with a copy of this book upon my request. The rating, ideas and opinions shared are my own.

About the Book: Will Val pie hard on national TV?

Business at the bakery may have slowed down, but Val Harris isn’t about to eat humble pie–not until a reality cooking show decides to whip the struggling Pie Town into shape. If Val can tolerate criticism from an abrasive pastry chef during filming, the free publicity might turn the unusual opportunity into the sweetest deal she didn’t know she needed.

Except no one in San Nicholas has an appetite for dessert once murder steals the spotlight. When the show’s bossy producer gets pushed to her death, Val and her flaky, septuagenarian pie crust expert, Charlene, follow crumbs in hopes of finding the killer. But with cameras still rolling and the shocking identity of the victim’s replacement a guaranteed recipe for disaster, Val needs to stay cool long enough to solve the crime and keep Pie Town from falling apart–or else she just might go up in smoke before she ever graces the small screen.

About the Author: I’ve never met a dessert I didn’t like, and my guilty pleasures are watching Ghost Whisperer re-runs and drinking red wine. The latter gives me heartburn, but I drink it anyway.

​Now based in San Mateo, CA, I write genre-blending cozy mystery, supernatural and steampunk suspense, mixing my experiences and imagination to create vivid worlds of fun and enchantment.

​If you like funny cozy mysteries, check out my Pie Town, Paranormal Museum and Wits’ End books. If you’re looking for some magic with your mystery, give the Witches of Doyle, Riga Hayworth and Rocky Bridges books a try. And if you like steampunk, the Sensibility Grey series might be for you.

​I send out original short stories of mystery and magic to my mailing list. If you’d like to get them delivered straight to your inbox, make sure to sign up for my newsletter on the home page. Feel free to follow me on Twitter or Bookbub, get in touch on Facebook, post a picture of one of my books to Instagram and tag me @kirstenweissauthor, or send me an email. I’ll answer you personally…which may be a good or a bad thing, depending on your perspective.