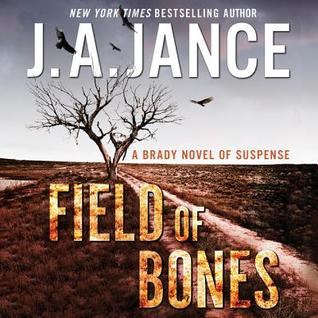 “Field of Bones” is the 18th book in the long-running Sheriff Joanna Brady mysteries series by J.A. Jance. This is the first one I have read, but I very much enjoyed this story and had no issues with the fact that I had not read the previous books. Having said that, I will go back and read as many as I can. I enjoy J.A. Jance’s writing and have been reading other books written by her for awhile now. This book finds Joanna Brady off work on maternity leave. Like many law enforcement personnel, leaves are meant to be broken, and when Joanna finds out about the most recent bodies found in the dessert, she can’t stay out of it. She does not take front and center in this one, but is a mentor and coach for most of the story and that works well. There is more than one body out there, an when they stumble upon a girl who has been held captive for quite a period of time, the investigation takes on a life of its own.

This was a rather descriptive thriller, with some graphic descriptions. I would definitely not recommend this one to people who are looking for a light mystery or police procedural. The story is told from several POVs, the captives, the captor/serial killer and some of the investigators. The captive sections are hard to stomach sometimes. Having said that, this was a page turner. I stayed up way too late reading this one and thought about the victims for a few days after I finished this book. It was well-paced and the investigation was very interesting. I really enjoyed this story. I listened to the audiobook, narrated by Hillary Haber. She is a voice-over artist and audiobook narrator who did an excellent job narrating this book. I would recommend it to those who enjoy mystery/thrillers and do not mind graphic descriptions in a story.

About the Book: Sheriff Joanna Brady’s best intentions to stay on maternity leave take a hit when a serial homicide case rocks Cochise County, dragging her into a far-reaching investigation to bring down a relentless killer in this chilling tale of suspense from New York Times bestselling author J. A. Jance.

This time Sheriff Joanna Brady may expect to see her maternity leave through to completion, but the world has other plans when a serial homicide case surfaces in her beloved Cochise County. Rather than staying home with her newborn and losing herself in the cold cases to be found in her father’s long unread diaries, Joanna instead finds herself overseeing a complex investigation involving multiple jurisdictions.

Filled with the beloved characters, small town charm, vivid history, intriguing mystery, and the scenic Arizona desert backdrop that have made the Joanna Brady series perennial bestsellers, this latest entry featuring the popular sheriff is sure to please J. A. Jance’s legion of fans.

out the Author: Judith Ann Jance was born in Waterton, South Dakota and raised in Brisbee, Arizona (the setting for her Joanna Brady series of novels). She is a graduate of the University of Arizona. Before becoming an author, she worked as a school librarian on a Native American reservation (Tohono O’Odham), and as a teacher and insurance agent.

She lives with her husband, part of the year in Arizona and part of the year in Seattle. Jance uses her initials for her pen name because a publisher told her that disclosing her gender would be a liability for a book about a male detective. She is the top 10 New York Times bestselling author of the Joanna Brady series; the J. P. Beaumont series; and the Ali Reynolds series and five interrelated thrillers about the Walker family. At signings, Jance asks bookstores to donate a percentage of their earnings from her appearances to various causes. Over the past 10 years, she has raised more than $250,000 for charity.  Visit her website at: http://www.jajance.com