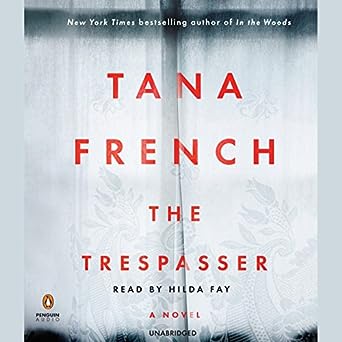 This is the first book I have read/listened to in the Dublin Murder Squad. I listened to this one and must say it was long and slow. In The Trespasser, Detectives Antoinette Conway and Steve Moran are assigned what they think is a run-of-the-mill domestic dispute gone horribly awry. When they arrive at the flat they observe that there is no forced entry and they find out that Aislinn Murray had a man coming over that evening. It seems to be open and shut, but something about this case gives Antoinette a funny feeling that it is more than it seems. As the story moves forward, they are concerned that Detective Breslin, a more experienced officer in the Murder Squad, wants them to arrest the boyfriend right away. He keeps telling them it is obvious, but despite his pushing, they continue to investigate and look into things determined to do a good job gathering evidence and finding the true culprit.

From reading other reviews, it seems this was not one of Tana French’s better books. The story is slow, with a lot of dialogue and use of expletives. I enjoyed getting to know the two main characters in this story, who are very well described. I loved getting to know Antoinette Conway, the female detective in a male dominated department. She is the only female detective who has made it to the Murder Squad and is constantly trying to prove herself. She and her partner Steve Moran are well matched. He seems docile, yet is a smart detective and knows when to step up and take the lead, otherwise he is happy letting her do it. Just like real life, detective work is a lot of interviewing and questioning in this story and that makes it a bit boring, until the last quarter of the story, which moves along at an extremely quick pace. There are several suspects and when the culprit is revealed, it is surprising. I did not figure it out until it became obvious in the story. I do wish that I had started with the first book instead of midway into this series to learn more about the Murder Squad. I listened to this book and once I became accustomed to the Irish lilt, I enjoyed the narration very much.

About the Book: Being on the Murder Squad is nothing like Detective Antoinette Conway dreamed it would be. Her partner, Stephen Moran, is the only person who seems glad she’s there. The rest of her working life is a stream of thankless cases, vicious pranks, and harassment. Antoinette is savagely tough, but she’s getting close to the breaking point.

Their new case looks like yet another by-the-numbers lovers’ quarrel gone bad. Aislinn Murray is blond, pretty, groomed-to-a-shine, and dead in her catalog-perfect living room, next to a table set for a romantic dinner. There’s nothing unusual about her—except that Antoinette’s seen her somewhere before.

And that her death won’t stay in its neat by-numbers box. Other detectives are trying to push Antoinette and Steve into arresting Aislinn’s boyfriend, fast. There’s a shadowy figure at the end of Antoinetteʼs road. Aislinnʼs friend is hinting that she knew Aislinn was in danger. And everything they find out about Aislinn takes her further from the glossy, passive doll she seemed to be.

Antoinette knows the harassment has turned her paranoid, but she can’t tell just how far gone she is. Is this case another step in the campaign to force her off the squad, or are there darker currents flowing beneath its polished surface? 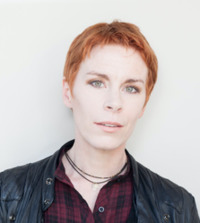 About the Author: Tana French is the New York Times bestselling author of In the Woods, The Likeness, Faithful Place, Broken Harbor, The Secret Place, The Trespasser and The Witch Elm. Her books have won awards including the Edgar, Anthony, Macavity and Barry Awards, the Los Angeles Times Award for Best Mystery/Thriller, and the Irish Book Award for Crime Fiction. She lives in Dublin with her family.