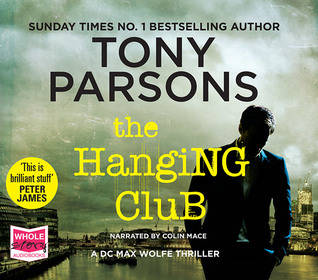 The Hanging Club is the third book in the Max Wolfe series. DC Wolfe is tasked with hunting a gang of killers/vigilantes who are perceived as heroes by many. They are meting out justice to people who have committed crimes that are considered atrocious and have either received light sentences or suspended sentences. Can Max and his team find these vigilantes and bring them to justice before there are any other victims.

This book has scenes that are extremely violent and gruesome, which was a bit more descriptive than the other two books in this series. It could have been totally dark, but once again his daughter Scout and her dog Stan add some lightness whenever they appear. Tony Parsons has penned a book with well rounded characters, a fast paced storyline with lots of plot twists and a lot of information about the history of London Jails and underground. We learned about the prison when Capital Punishment was carried out and some of the trails, pathways and tunnels under the city. Tony Parsons raises some interesting questions about justice, or the lack of it and how victims of crime are often treated worse than the perpetrators. It had me thinking about what I would do or want done to someone who perpetrated the horrible crimes in this book if it had been a relative of mine who was the victim. Quite a moral dilemma. I listened to the audiobook of The Hanging Club narrated by Colin Mace. I once again enjoyed his narration. He gave it that hard-boiled feel with a lot of suspense and feeling. If you enjoy a good, well-paced, police procedural and don’t mind graphic descriptions, then grab this book and series to either read or listen to, you won’t be disappointed.

About the Book: Someone just brought back the death penalty. The third book in Tony Parsons’ bestselling DC Max Wolfe series.

A band of vigilante executioners roam London’s hot summer nights, abducting evil men and hanging them by the neck until dead. Sentenced to death is the gang member who groomed and abused dozens of vulnerable girls; the wealthy drunk driver who mowed down a child; and the hate preacher calling for the murder of British troops.

As the bodies pile up and riots explode all over the sweltering city, DC Max Wolfe embarks on his most dangerous investigation yet, hunting a gang of killers who many believe to be heroes.
But before he can confront them, Max Wolfe learns some painful truths about the fragile line between good and evil, innocence and guilt, justice and retribution. And discovers that the lust for revenge starts very close to home. 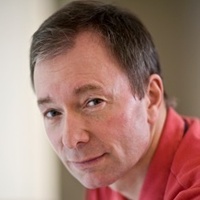 About the Author: TONY PARSONS left school at 16 and was working on the night shift of Gordon’s Gin Distillery in Islington, London, when he was offered his first job in journalism on New Musical Express. He spent the next few years travelling with and writing about such legendary musicians as The Rolling Stones, David Bowie, The Clash, The Sex Pistols, Blondie and Bruce Springsteen. After quitting the music press aged 25, he went on to become and award-winning journalist and a bestselling novelist. His books have been translated into more than 40 languages, most recently Vietnamese. His autobiographical novel MAN AND BOY won the UK’s Book of the Year Prize.

In 2014 Tony publishes his first crime novel – THE MURDER MAN, the first in a trilogy of books about Detective Max Wolfe – single parent and dog lover, boxer and insomniac, defender of the weak and every murderer’s worst nightmare.

Tony lives in London with his wife, his daughter and their dog.