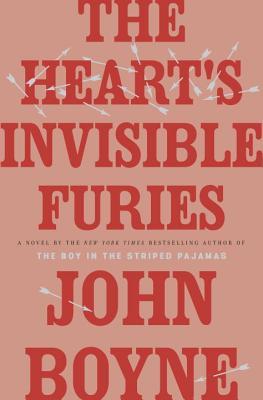 It took me almost two weeks to finish this book. It was not because I didn’t enjoy it, but because I only read a bit each day, immersing myself into Cyril Avery’s life, Cyril who isn’t a real Avery. I began this one during Reading Ireland month and was not at all sure what to expect. What I got when I read this book was a heartfelt story of an Irish child/man and all the trials he went through in his life.

This book is brimming with life with all its emotional moments and messiness that real life brings. Sadness and joy, sorrow and pain, friendship and love and eventually peace and forgiveness. Cyril does not have an easy life. From his birth and adoption, homosexuality, unrequited love, mistakes, escape and eventual return to Dublin, he lives life and takes all the bumps and and a few moments of happiness in stride. There are so many wonderful characters we meet along with Cyril in this story. This is also the story of Cyril’s real mother, Mrs. Goggin, who isn’t really a Mrs. at all. She coincidentally flits in and out of Cyril’s life, not knowing who each other is. This book got under my skin. I felt more for Cyril than I have for any character in a long time. The dialogue is outstanding, often humorous, and my favorite part of this book. I loved how so many of the situations were like a comedy of errors, then other parts tragic and sad. John Boyne took me on a ride with this book, and it was a ride that I didn’t want to end. Not sure yet if this will be my favorite book of the year but it is definitely one of them. I want to thank all those book bloggers that encouraged me to give this one a go, especially Mackey from Mac’s Books.

About the Book: From the beloved New York Times bestselling author of The Boy in the Striped Pajamas, a sweeping, heartfelt saga about the course of one man’s life, beginning and ending in post-war Ireland.

Cyril Avery is not a real Avery–or at least that’s what his adoptive parents tell him. And he never will be. But if he isn’t a real Avery, then who is he? Born out of wedlock to a teenage girl cast out from her rural Irish community, and adopted by a well-to-do if eccentric Dublin couple via the intervention of a hunchbacked Redemptorist nun, Cyril is adrift in the world, anchored only tenuously by his heartfelt friendship with the infinitely more glamorous and dangerous Julian Woodbead. At the mercy of fortune and coincidence, he will spend a lifetime coming to know himself and where he came from and–over his many years–will struggle to discover an identity, a home, a country and much more.

In this, Boyne’s most transcendent work to date, we are shown the story of Ireland from the 1940s to today through the eyes of one ordinary man. The Heart’s Invisible Furies is a novel to make you laugh and cry while reminding us all of the redemptive power of the human spirit.

About the Author: John Boyne (born 30 April 1971 in Dublin) is an Irish novelist.
He was educated at Trinity College, Dublin, and studied Creative Writing at the University of East Anglia, where he won the Curtis Brown prize. In 2015, he was awarded an Honorary Doctorate of Letters by UEA. John Boyne is the author of ten novels for adults and five for young readers, as well as a collection of short stories. His novels are published in over 50 languages.

The Boy in the Striped Pyjamas, which to date has sold more than 7 million copies worldwide, is a #1 New York Times Bestseller and a film adaptation was released in September 2008. Boyne resides in Dublin. He is represented by the literary agent Simon Trewin at WME in London, United Kingdom. His most recent publication is the novel ‘The Heart’s Invisible Furies’, published in the UK in February 2017. It will be published in the USA in August.

13 thoughts on “The Heart’s Invisible Furies by John Boyne”