Pieces of Her by Karin Slaughter, Kathleen Early (Narrator) 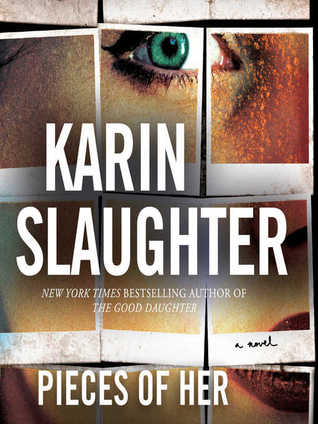 Karin Slaughter is one of my go to authors. I have read all her books and loved them. This one is a stand alone book and although it was enjoyable, it was not as good as her series have been. This is the story of Laura and her daughter Andrea. When Laura and Andrea are celebrating Andrea’s birthday at a local diner, an armed gunman comes in and starts shooting at the people that Laura and Andrea are eating with. When he thinks Andrea is a cop (she is a 911 dispatcher) he threatens to kill her. Laura steps in, saves her daughter and kills the gunman. Is she a hero or a murderer. As the story progresses, Andrea finds out that her mother is not the person she thought she knew and that both their lives are in danger.

I was hooked from the first chapter and wanted to find out what was going on. As the story unfolded, the chapters alternate between 2018 and 1986. It is like reading two different stories and it was quite far into the book when the connection between the two stories is revealed. I had some inkling, but was not completely correct in my thoughts. I didn’t like Andy very much. She is supposed to 31, but is very immature, still depends on her parents and is not sure what she wants to do with her life. She makes some really bad decisions and her inner monologues were very irritating. That said, she was in a pretty difficult position. As the story went on, I began to figure out what was going on and was rooting for both Laura and Andy to survive and solve the situation. Pieces of Her explores Andy’s search for the truth, as she goes on the run and begins digging into her mother’s past. I do enjoy dual timelines and this was not exception, it was a great technique for this story. This story has plenty of mystery and action, as well as examining a mother-daughter relationship. The mystery is who is Laura, and what is she hiding. The action is bouts of violence and mayhem in both timelines. The mother-daughter relationship shows that Laura had a life before becoming a mother, yet has had a very low-key life while raising her daughter, even if she was not completely honest with her. Overall a good Karin Slaughter story, but without the darkness that is often in her stories. I recommend this one to any Karin Slaughter book lovers, as well as those readers who enjoy mystery, intrigue told in a dual-timeline. I listened to this story narrated by Kathleen Early. I very much enjoyed listening to this story. It was well read, with emotion that had me listening intently.

About the Book: Andrea Oliver’s mother, Laura, is the perfect small-town mum. Laura lives a quiet but happy life in sleepy beachside Belle Isle. She’s a pillar of the community: a speech therapist, business owner and everybody’s friend. And she’s never kept a secret from anyone. Or so Andrea thinks.

When Andrea is caught in a random violent attack at a shopping mall, Laura intervenes and acts in a way that is unrecognisable to her daughter. It’s like Laura is a completely different person – and that’s because she was. Thirty years ago. Before Andrea. Before Belle Isle.

Laura is hailed as a hero for her actions at the mall but 24 hours later she is in hospital, shot by an intruder, who’s spent decades trying to track her down.

What is Andrea’s mother trying to hide? As elements of the past return and put them both in danger, Andrea is left to piece together Laura’s former identity and discover the truth – for better or worse – about her mother. Is the gentle, loving woman who raised her also a violent killer?

About the Author: Karin Slaughter is one of the world’s most popular and acclaimed storytellers. Published in 37 languages, with more than 35 million copies sold across the globe, her eighteen novels include the Grant County and Will Trent books, as well as the Edgar-nominated Cop Town and the instant New York Times bestselling novels Pretty Girls and The Good Daughter. A native of Georgia, Karin currently lives in Atlanta. Her novels Cop Town, The Good Daughter, and Pieces of Her are all in development for film and television.

14 thoughts on “Pieces of Her by Karin Slaughter, Kathleen Early (Narrator)”