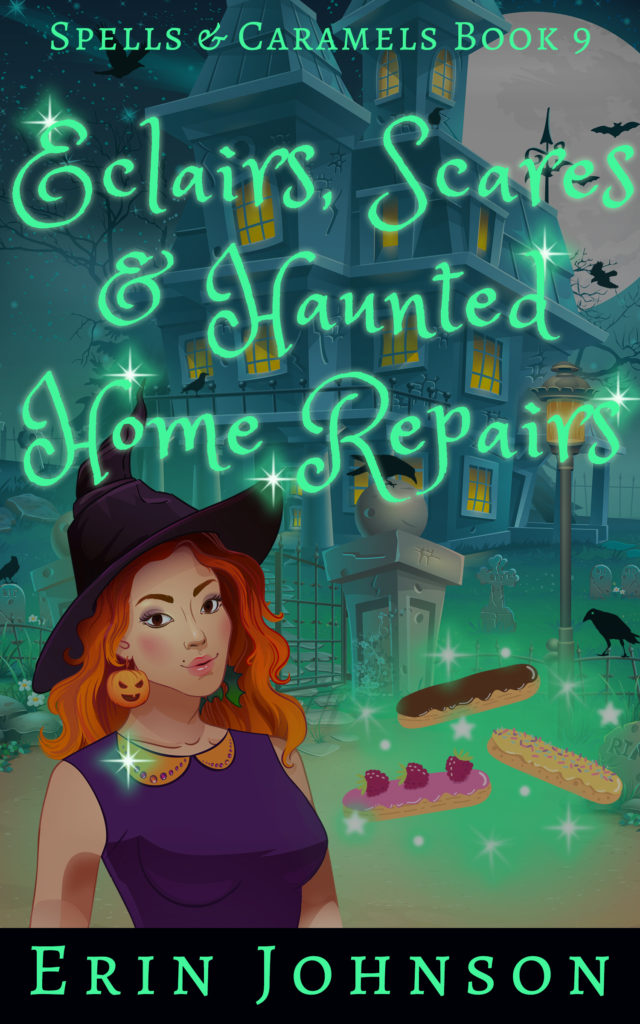 A bakehouse in the making. A dangerous ghost in the tower. Will their welcome to the neighborhood be short-lived?

Imogen wants nothing more than to complete her sweet dream. With her adoring fiancé Hank at her side, the witch and her friends dive into renovations for their new home and soon-to-be bakery. But all their efforts seem futile when they wake to find the house eerily ripped apart all over again…

As Imogen examines her humble abode’s shady history, she discovers evidence for a malevolent spirit living inside. But with less-than-welcoming neighbors keeping a close, suspicious watch, she wonders if it’s not the dead but the living who pose the biggest threat…

Will Imogen root out the culprit, or will her culinary future collapse under the weight of an unsolved murder?

I have not read the full series, but am working my way through the ones I have missed. This is a fun series best read in order. The quick backstory is that Imogen is an American baker who finds out that she’s a witch. She enters a baking contest in a magical and foreign land and her life, as she knows it, will never be the same. She has a brother with pretty amazing powers that she knew nothing about. She falls in love with a prince who is banished from his kingdom. Throughout the books we learn about different kingdoms and magical lands, various creatures, types of magical powers and they solve a mystery or two along the way. In this story, Imogen, Hank and the rest of their little group of friends have been given a house to repair and use as their home and bakery. The only problem is that is seems to be haunted by the owner who disappeared ten years earlier in a typhoon. A ghost or spirit appears to them a few times and some other townspeople don’t want the house to be renovated, especially to be opened as a bakery. Who killed Daichi, the owner of the house and famous prosecutor? Is the house haunted or cursed?

I am really enjoying this series. The characters are all very unique with different skills and powers. This group of friends have been through some difficult situations and they should have known that renovating this home would not go smoothly. The ravens and the brambles should have been a tip off. Imogen is wonderful. She will do anything for her friends even when it endangers her. She does sometimes leap before thinking, but Hank and her other friends are all there to help. It is nice that Imogen is getting to know her brother, Horace, in fact it seems like he is trusting her more. I can’t forget Iggy. He is the humour in the story. With his sarcasm and witty comments that come fast and furious, you’ve just got to love him. Erin Johnson has an engaging writing style which draws the reader into the story quickly. I enjoy her descriptions of the homes, forest, creatures and even the baked treats. They are so vivid, that I can easily picture them as I read. The mystery in this book was interesting and somewhat unique, but I will say that I figured out what was going on pretty quickly as far as the mystery goes. That did not diminish my enjoyment of the story though. The ending, was very tense and unexpected. This is a great series with some fantasy, magic, mystery. friendship, family drama and romance all in one, this is a book for everyone to enjoy. I received a copy of this book to read upon my request. The rating, ideas and opinions stated are my own.

About the Author: Erin Johnson is a native of Tempe, Arizona, Erin spends her time crafting mysterious, magical, romance-filled stories that’ll hopefully make you laugh. In between, she’s traveling, napping with her dogs, eating with her friends and family, and teaching Pilates (to allow her to eat more).