The Secret Life of Mac by Melinda Metz 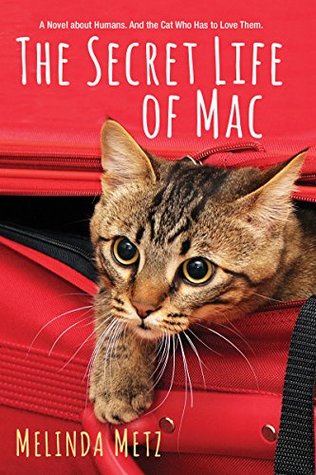 The Secret Life of Mac is a follow-up story to the contemporary romance, Talk to the Paw by Melinda Metz. These stories have a very different twist to them, in that the POV is from Mac (MacGyver) the cat, as well as the main characters. Mac has a mission in life, to make humans happy, whether in romance, friendship or life in general.

In Talk to the Paw, Mac played matchmaker and got his owner Jamie together with her neighbour David. In this story, they are on their honeymoon and Jamie’s cousin Briony, who just left her fiancé at the altar, is staying at the house and pet-sitting for Mac and D-O-G, David’s dog. Apparently, Briony passed out walking down the aisle and has decided that they are obviously not meant for each other. Once Mac gets a whiff of Briony, he knows that smell, she is sad and lonely. Let the games begin as Mac sets out to find her the perfect mate.

This book is another cute rom-com, where Mac is the matchmaker. I did not see Mac’s role as much in this book as the first one. Once he lured Briony to the Retirement Community that Nate runs, things seemed to progress without too much interference from Mac. Most of this story was told from the point of view of Briony or Nate. I am not a big fan of insta-love, especially in rebound, but it seemed to work. Nate had a ton of issues he was dealing with and Briony was able to help him work through some of them as well as doing a lot of self-assessment and discovery of her own. I enjoyed the various characters involved in the story and there was even a bit of a mystery, Nate’s family were really needy, but as the book progressed, so did their relationships and expectations. The mystery was solved with Mac’s help, so he was still the hero in the story. The neighbourhood where these stories take place is fun. The neighbours and even the name of the streets are cute and add to the sweetness of the book. I enjoyed this book and hope to see more from Mac, the matchmaker. The publisher generously provided me with a copy of this book upon request. The rating, ideas and opinions shared are my own.

Inspired by the true story of a kleptomaniac cat who stole his way into America’s heart . . .

HE’S THE CAT THIEF OF LOVE: MacGyver the tabby is feeling very pleased with himself. His human, Jamie Snyder, has found the perfect packmate—and it’s all thanks to Mac. By stealing personal items from the home of Jamie’s handsome neighbor David, the matchmaking cat brought these two L.A. singles together. Now, while the newlyweds are off on their honeymoon, MacGyver is ready for a well-deserved cat nap. That is, until he meets his cat sitter Briony. Like most humans, she’s hopeless when it comes to romance. And Mac can’t resist a challenge . . .

SHE’S FOUND THE  ESCAPE CLAWS: Briony feels terrible about leaving her fiancé at the altar. When her cousin Jamie offers her the chance to cat sit MacGyver, the runaway bride leaps at the chance to cuddle up with the only male creature she trusts herself around. But MacGyver has other plans. He lures Briony to a friendly neighborhood retirement community—run by a charming young hottie named Nate. Briony and Nate hit it off instantly. But Briony’s still not sure she’s ready for a relationship. And Nate’s got problems of his own—someone is sabotaging his community.

Crazy humans. Why can’t they follow their instincts and go after the love they deserve? MacGyver is on the case. And this time, he’s not pussyfooting around . . .

About the Author: Melinda Metz grew up in San Jose, California. Her mother tried to teach her to read in kindergarten, but Melinda had no interest. She also had no interest in learning to write her name. (FYI, when Melinda was in kindergarten it was all about finger-painting, play time, and naps.) Eventually, she mastered both and even majored in English at San Jose State University.

After college, Melinda moved to Manhattan to seek her fortune, which involved learning to identify fruits and vegetables while working at a grocery store, making $2.73 working backstage for an off-off Broadway play (her part of the box-office profits), and editing books.

Melinda and the lovely and talented Laura J. Burns pretty much became unofficial writing partners when they were editors at the same company. They teamed up to brainstorm story ideas, and at some point their brains fused in some key places. Later they worked on the Roswell High book series, Laura developing and editing the series, Melinda writing.

That series led to Melinda and Laura, now an official writing team, writing two TV pilots, moving to L.A. to work on the Roswell TV show, and briefly living in Toronto while on the writing staff of 1-800-Missing. They both continue to write books, together and separately.

Melinda lives in Concord, NC with her dog, Scully (yes, she loves the woo-woo so much she named her dog after a kickass X-Files character). She has never regretted learning to read and write her name.

18 thoughts on “The Secret Life of Mac by Melinda Metz”