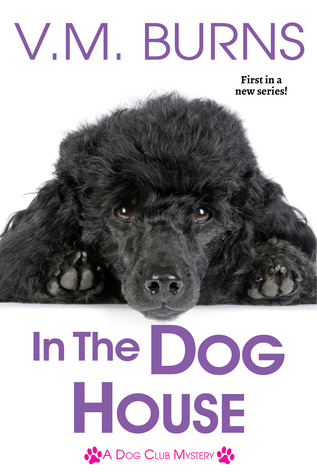 This was a great start to a new series. The main characters are fantastic (smart and sassy) and the dogs, oh how I loved the dogs, especially, Aggie (short for Agatha Christie). As soon as I finished this one I started the second and new one. If you have not read this book, I recommend you grab it now and enjoy the first two in this series.

Lilly Echosby is being dumped. Her husband is divorcing her for a bimbo named Bambi that he met at a strip club. While trying to come up with a settlement, Albert is shot dead in a supposed robbery gone bad. Lilly, of course, is the prime suspect, isn’t it always the spouse? Fortunately for Lilly, her BFF, Dixie has arrived with her RV and two standard poodles in tow. As well, she has a toy poodle that she has rescued from a puppy mill, who is absolutely adorable, yet needs a lot of training. Lilly names her Aggie and they fall in love. With her two grown kids in town for their dad’s funeral (one a defense attorney, one an actor) along with Dixie they decide they need to investigate on their own if they are going to clear Lilly. When a second murder occurs, she is blamed for that as well and gets arrested. With the help of a handsome, blue-eyed, K-9 officer named Joe and his dog Turbo, they get into some funny scrapes, yet are able to solve the mystery.

This was a great story. There was so much happening with the divorce, murders, embezzlement, family drama, crazy animal action and some romance (not Lilly). Lilly was not someone who was going to back down, even when it came to a couple of physical altercations. As much as I loved Lilly, Dixie and Stephanie, I hated Bambi. She gives women a bad name. The male characters, who were somewhat secondary, were still a large part of the plot and story. The author does an amazing job of tying all these plot-lines together in a fantastic ending. There were enough clues dropped along the way that I did figure out what was going on and who the murder was, but how they solved the crime, and the tension packed showdown, kept me reading quickly until the end. Dixie is a fantastic sidekick, she is funny, yet smart and sassy. Lilly’s kids, Stephanie and David were amazing. I loved the relationship they had with their mom and the way they jumped in to help find the murderer. The dogs were definitely stars. Poodles may not be attack dogs but, these dogs had one man shaking in his boots and were able to take down another, I loved them. There was just enough humour in this story to keep me smiling throughout. I will definitely look for me books by V.M. Burns. I definitely recommend this book and the next in this series. The publisher generously provided me with a copy of this book upon request. The rating, ideas and opinions shared are my own.

About the Book: A killer wants Lilly Echosby to roll over and play dead . . .

Lilly may be losing a husband but she’s gaining a toy poodle. That could be seen as a win-win, since her new adopted pooch Aggie (named after Agatha Christie) is cute and adorable, and Lilly’s dirty dog of a spouse is cheating on her with a blond bimbo—except for one problem: Albert Echosby’s just been murdered, and Lilly is the number-one suspect.

With the cops barking up the wrong tree, it’s a good thing her best friend Scarlett “Dixie” Jefferson from Chattanooga, Tennessee, decided to take a break from the dog club circuit to pay a visit, along with her own prize pair of poodles. With help from Dixie, her defense attorney daughter, and a blue-eyed man in blue with a K-9 partner, Lilly is determined to collar the real killer. But when a second murder occurs, it’s clear they’re dealing with one sick puppy . . .

About the Author: V.M. Burns was born in Northwestern Indiana and spent many years in Southwestern Michigan on the Lake Michigan shoreline. She is a lover of dogs, British historic cozies, and scones with clotted cream. After many years in the Midwest, she went in search of milder winters and currently lives in Eastern Tennessee with her poodles. Her debut novel, The Plot is Murder was nominated for a 2017 Agatha Award for Best First Novel. Valerie is a member of Mystery Writers of America, International Thriller Writers, and a lifetime member of  Sisters in Crime.