I read this book about a month ago and just realized that I forgot to review it. I had no problem writing the review because this story really resonated with me, but I can not comment on the narration except to say that I remember enjoying it very much. 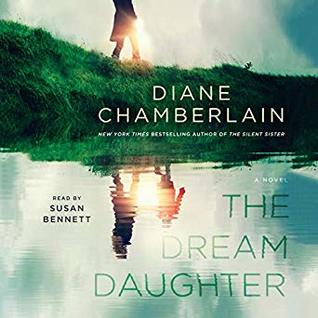 I am in a bit of a quandary when trying to decide what genre this book belongs to. It is a time travel story, so Science Fiction, but there is a lot of family drama, so literary fiction or drama, perhaps a bit of suspense when trying to determine what is going to happen next, maybe it is all a dream and it is fantasy. Whatever genre you want to categorize this book as, I loved it. It was not what I was expecting, and that is okay, and it kept me from doing much else until I finished listening to this story. After thinking about this book, I agree with other reviewers, that this book is about a mother and the choices she will make to ensure that her baby will survive and have a healthy and happy life.

Hunter is a physicist and time traveler and has landed in 1965 from the future, this is not a spoiler, it is in the blurb. Hunter is married to Patti and Caroline along with her husband Joe are great friends. Unfortunately, Joe is killed in the VietNam war, just before Caroline finds out she is pregnant. When she learns that her baby has a heart defect that means he/she will not survive she is devastated. She will have nothing left of Joe or their life together. Hunter tells her that he can save her baby by sending her to the future where they can do surgery. Caroline doesn’t know what he is talking about, but finally he convinces her that time travel is possible and that he is from the future. She agrees to his plan. What follows is an amazing story.

The novel moves from the present to the future and back again seamlessly. I was fascinated by the story and finished it in one day. This is a very character driven story. Caroline was a mother that wanted nothing else than to save her baby, then make sure that she was happy. I felt for Caroline and the various decisions that she had to make. No one can know what you would do to save your child, but I am betting it would be everything you possibly could and that was what Caroline did. I loved the way the author wrote about the culture shock Caroline faced from 1970 North Carolina to 2001 New York City. It was funny, yet believable. This is where the light hearted parts of the story came in. The characters she met that helped her were well written and helped to make the story believable. There were a few twists in this story that left me wondering what was going to happen next and added to the suspense and tension. The ending was not a surprise, as I was pretty sure I knew what was going to happen, but I loved it nonetheless. I definitely recommend this book to lovers of literary fiction with some Sci-Fi thrown in. I really enjoyed the narration of Susan Bennett. She did a great job with the cadence of the story that had me sitting on the edge of my seat. A great audiobook to listen to if you enjoy audiobooks.

About the Book: New York Times bestselling author Diane Chamberlain delivers a thrilling, mind-bending novel about one mother’s journey to save her child.

When Carly Sears, a young woman widowed by the Vietnam war, receives the news that her unborn baby girl has a heart defect, she is devastated. It is 1970, and she is told that nothing can be done to help her child. But her brother-in-law, a physicist with a mysterious past, tells her that perhaps there is a way to save her baby. What he suggests is something that will shatter every preconceived notion that Carly has. Something that will require a kind of strength and courage she never knew existed. Something that will mean an unimaginable leap of faith on Carly’s part.

And all for the love of her unborn child.

The Dream Daughter is a rich, genre-spanning, breathtaking novel about one mother’s quest to save her child, unite her family, and believe in the unbelievable. Diane Chamberlain pushes the boundaries of faith and science to deliver a novel that you will never forget.

About the Author: Diane Chamberlain is the New York Times, USA Today and Sunday Times bestselling author of 26 novels published in more than twenty languages. Her most recent novel is The Dream Daughter. Diane likes to write complex stories about relationships between men and women, parents and children, brothers and sisters, and friends. Although the thematic focus of her books often revolves around family, love, compassion and forgiveness, her stories usually feature a combination of drama, mystery, secrets and intrigue. Diane’s background in psychology has given her a keen interest in understanding the way people tick, as well as the background necessary to create her realistic characters.

Diane was born and raised in Plainfield, New Jersey and spent her summers at the Jersey Shore. She also lived for many years in San Diego and northern Virginia before making North Carolina her home. She received her bachelor’s and master’s degrees in clinical social work from San Diego State University. Prior to her writing career, Diane worked in hospitals in San Diego and Washington, D.C. before opening a private psychotherapy practice in Alexandria Virginia specializing in adolescents. All the while Diane was writing on the side. Her first book, Private Relations was published in 1989 and it earned the RITA award for Best Single Title Contemporary Novel.

Diane lives with her partner, photographer John Pagliuca, and her sheltie, Cole. She has three stepdaughters, two sons-in-law, and four grandchildren. She’s currently at work on her next novel. Please visit Diane’s website dianechamberlain.com for more information on her newest novel, The Stolen Marriage, and a complete list of her books.

About the Narrator: The original voice of Apple’s Siri not only gives directions; she greets passengers at Delta gates worldwide, helps people discover Better Ingredients in pizza, and makes the Mission Possible.

Susan Bennett is the voice you hear as Siri on your iPhone. CNN recently broke the story and Susan confirmed that she is the formerly anonymous voice of Siri.

In addition to over 20 years behind the mic as a voice actor Susan is also an accomplished singer. She’s a member of the American Federation of Musicians and Women in Film and a member of the band Laugh and Cry. She’s sung backup for Burt Bacharach and Roy Orbison too. When it comes to using her voice there’s no equal.