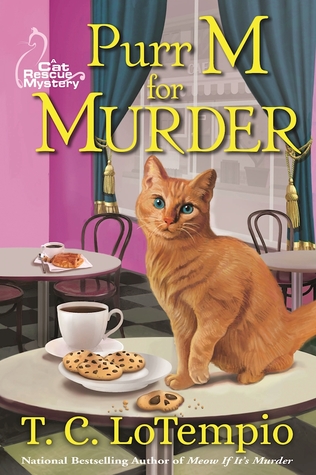 I read the second book in this series, and had to go back and read this one to get the back story about Syd, Kat and Leila. This was a great start to a new series. I love the idea that their occupations are running a pet rescue, mostly cats, but they do not turn away other animals.

Sydney (Syd) McCall has returned home to Deer Park, NC after a bad relationship. She also quit her job working as the promotions manager in her fiancé’s father’s company. When she does not find a job right away, her sister, Kat, the manager of the Friendly Paws animal shelter offers her a temporary position running an upcoming event, a cat cafe. They are up against some resistance from Trowbridge Littleton, a rich business man in town who’s only pleasure in life seems to be making others miserable. He’s upsetting all the merchants in the area by threatening to raise their rent, he’s opposing the cat cafe and rumor has it he is trying to shut down the animal shelter. When Kat threatens him, and he threatens her in return, nobody thinks much of it, until he is found dead the next morning, by Kat and Syd. Of course, this means that Kat is at the top of the suspect list, at least for Detective Hank Bennington. Detective Will Worthington is an old friend of Syd’s and he assures her that he will do everything to make sure Kat is not arrested. With the help of Leila, Syd’s roommate, who is also a local reporter, Syd sets out to find the real murderer.

I really like the main characters in this story. Kat and Syd are siblings that truly care about each other. They will do whatever they can to help each other. They are both smart, headstrong and will do whatever it takes to fight for what they believe in. Leila is the third in their little group. She and Syd were best friends growing up and have picked up where they left off. Toby, is a rescue cat who is smart, able to communicate with Syd in various ways and is known as the wanderer. He seems to be able to get in and out of situations with no one even realizing it. There are times in this book that Syd is lucky he has this ability. The relationship with Will gets off to a good start, with Syd and Will planning a dinner. The mystery is well paced. There are a lot of suspects, with a lot of motives, although most of them boil down to money. I waffled back and forth as to who was the murderer, but struck out. The final reveal and take down was pretty exciting and in hindsight there were some clues that I had not taken seriously when reading. There were some good twists right until the end and I read through this one quickly to get to the resolution. A great choice for a cozy mystery reader, especially if you enjoy ones with animals. The publisher generously provided me with a copy of this book upon request. The rating, ideas and opinions shared are my own.

About the Book: Sydney McCall left behind an ex-fiancé and a New York advertising job to return home to Deer Park, North Carolina and help her sister, Kat, run the local animal shelter, Friendly Paws. Determined to save the shelter from financial trouble, Sydney and Kat organize a cat café fundraising event at a local coffee shop. Things are looking up until their landlord, Trowbridge Littleton, threatens to shut down the event. When Sydney drops by his art gallery to make peace, she finds Kat–along with Littleton’s dead body.

Local homicide detective Will Worthington–who just happens to be Sydney’s old high school crush–is highly suspicious of the sisters’ involvement. Desperate to clear their names from the suspect list, Sydney pounces on the investigation. With the help of one of the shelter cats, a savvy orange tabby named Toby, Sydney begins poking her nose into other local businesses whose owners may have benefited from Littleton’s death–until the killer notices she’s pawing a little too closely at the truth.

About the Author: While Toni Lotempio does not commit – or solve – murders in real life, she has no trouble doing it on paper. Her lifelong love of mysteries began early on when she was introduced to her first Nancy Drew mystery at age 10 – The Secret in the Old Attic.  She (and ROCCO, albeit he’s uncredited) pen the Nick and Nora mystery series from Berkley Prime Crime – the first volume, MEOW IF ITS MURDER,

, was released in December. She, Rocco and Maxx make their home in Clifton, New Jersey, just twenty minutes from the Big Apple – New York.