Read and Gone (The Haunted Library Mysteries #2) by Allison Brook 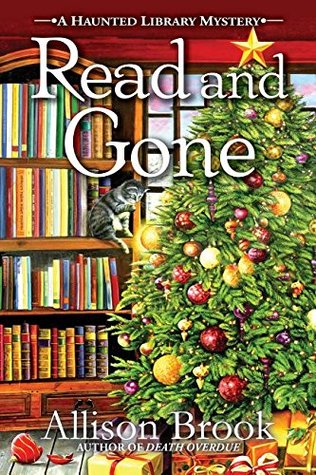 In this second book in The Haunted Library Mysteries, Carrie Singleton is the head of programs and events at the Clover Ridge Library. She loves her job, even though there is one employee who is a thorn in her side. She also has a special friend, the ghost of a former librarian, Evelyn who she is able to share her problems with as well as being a great sounding board. Carrie is gearing up for the holiday season at the library, as well as celebrating her birthday and housewarming with her new friends and family. When she is awoken at night by a sound, she finds her long-lost father in her home, begging her to help him. Jim Singleton is a thief who has spent time in jail and is a suspect in a multi-million dollar jewel heist. He tells her about the heist and the local jeweler who refuses to give him his share. Soon after, the jeweler is found murdered. Is her father a thief and a murderer? When her father is attacked, they are now on the hunt for the jewels and the murderer who is also after the jewels and her father.

Read and Gone is an entertaining story. I like the setting of a small town library, especially with all the activities going on and the idea that it is the gathering place. I don’t mind the ghost story, as Evelyn is a hoot and a very helpful ghost when it comes to sleuthing. Smokey Joe is the library cat, who belongs to Carrie and is loved by all, except of course, Miriam. Carrie is a great MC, she is smart, creative and feisty when necessary, but sometimes reacts negatively without thinking things through. Family is very important to her, so she agrees to help her father, even though he was not around much in her life. The mystery moved along at a nice pace, with plenty of investigation, suspects and twists. There was a lot of physical altercations in this story, much more than I expect in a cozy mystery. Carrie’s relationship with Dylan was quite rocky in this story, with Carrie finally realizing that she really cares for Dylan and is ready to take the relationship to the next level. The final reveal had some surprises, but also a lot of what I had figured out was correct. I enjoyed this story, but not quite as much as the first in the series. I will continue to read this series to see what is next in store for Carrie, Evelyn and the library gang. The publisher generously provided me with a copy of this book upon request. The rating, ideas and opinions shared are my own.

About the Book: Seven-million dollars’ worth of missing gems bring Carrie Singleton’s long-lost and larcenous dad back into her life and it’s up to Carrie to clear his name.

A devoted dad is as precious as diamonds, but Carrie Singleton wouldn’t know since her dad Jim’s been on the lam most of her life. In an unusual family reunion, she finds Jim breaking into her cottage in the middle of the night. The fun really starts when he begs her to help him recover his half of a seven-million-dollar gem heist he pulled off with the local jeweler, Benton Parr. When she refuses, Jim takes off again.

Carrie finds her father again behind bars for the recent murder of Benton Parr. Who made the connection? Unbeknownst to her, Carrie’s boyfriend Dylan, an insurance investigator, has been searching for the gems. Determined to find the jewels herself, she starts examining every facet of Parr’s life. She turns up a treasure trove of suspects, one of whom bashes her on the head as she’s searching the victim’s country cabin.

Retreating to the quiet confines of the library where she works, Carrie watches as Smokey Joe, the resident cat, paws at a hole in the wall. Is he after the library’s ghost Evelyn, or something shinier? 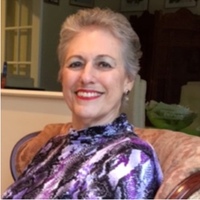 About the Author: Allison Brook is a pseudonym for Marilyn Levinson. Growing up in Brooklyn, New York, Marilyn dreamed of becoming a ballerina or a writer. She practiced her pirouettes and penned short stories. Her family moved to Long Island, where she continued to write stories until she was discouraged by a high school English teacher. Turned off to writing, she continued to read voraciously in college and concentrated on her major, Spanish. She studied in Mexico and Spain, intent on becoming fluent in the language. She taught high school Spanish, married her dentist husband, a started a family. When her two sons were small, she found herself drawn back to writing fiction.

“A writer is a writer forever. We may have more than our share of disappointments, but the rewards are many – knowing you bring joy to reader and sharing the camaraderie and support of your fellow scribes. Writing is a way of life, one I wouldn’t relinquish for anything.”