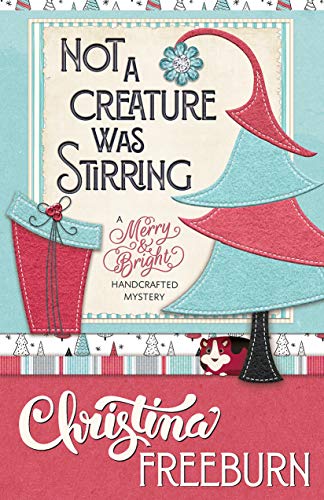 Not a Creature Was Stirring (Merry & Bright Handcrafted Mystery)

Empty nester Merry Winters loves three things: Christmas, crafting and her family. To regain purpose and joy, Merry hits the road to a Christmas vendor event with her furry sidekick Ebenezer in her new mobile crafting sleigh, aka an RV.

But it soon turns into the nightmare before Christmas when Merry unwraps her Scrooge of an ex-husband’s body in one of the RV’s compartments. Add to that his missing winning lottery ticket believed to be stashed somewhere in the RV, leading the homicide detective and Merry’s stepdaughter to believe Merry is the one whodunit.

With visions of prison dancing in her head, will Merry be able to solve this Christmas calamity before she’s locked away?

4 Stars: This is the first book in a new series starring protagonist, Merry Winters.Merry was adopted as a baby after being found on the steps of a church on Christmas Eve. She has recently divorced her two-timing husband Samuel. She wants to be a full-time crafter, so when her step-daughter offers to sell her an RV she jumps at the offer, using most of her savings. It is not until she arrives at a craft show and tries to find out what the terrible smell in the RV is, that she finds Samuel, dead in the bench seat. Of course, she is the main suspect. What follows is a wonderful introduction to the important people in Merry’s life, the ones she is not so happy with and her nosy, annoying neighbour.

I enjoyed the characters in this book. Merry is a great character that is quite upbeat most of the time. She is caring, loves her family and wants to protect those close to her. The town is quaint, but we need to see more of its citizens to really get a feel of the place. There are a couple of possible romantic interests for Merry, but she does not seem interested. I really enjoyed the characters of Grace and Abraham. It is nice to see a character with autism, who is able to lead a relatively good life, but the worries of his mom are real. Ebenezer, the guinea pig is a delight. He has free run of the house and seems more like a cat or dog. I love how his noises and antics are described. Overall, this was a solid introduction to this series. The mystery was quite interesting as it turns out, there were many people who might have wanted Samuel dead. Throw in a missing “ticket”, a lottery where the winner has not come forward, and a totally destroyed RV and there are a lot of clues and red herrings. There are many twists as Merry begins to explore what happened, The police seem to think they know who the murderer is, so if she wants to stay out of jail, she better find out who really killed Samuel. I did figure out who the murderer was earlier than the reveal, but it was still an exciting time to see what was going to happen next. This book was the right mix of Christmas cheer, family relationships, mystery and community. I am looking forward to seeing where Christina Freeburn takes us in the next outing with Merry Winters. 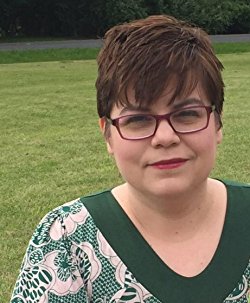 About the Author: Christina Freeburn has always loved books. There was nothing better than picking up a story and being transported to another place. The love of reading evolved into the love of writing and she’s been writing since her teenage years. Her first novel was a 2003 Library of Virginia Literary Award nominee. Her mysteries series, Faith Hunter Scrap This Mystery and Merry & Bright Handcrafted Mysteries, are a mix of crafty and crime and feature heroines whose crafting time is interrupted by crime solving.

Christina served in the US Army and has also worked as a paralegal, librarian, church secretary, and golf shop pro. She lives in West Virginia with her husband, dog, and a rarely seen cat except by those who are afraid and allergic to felines.