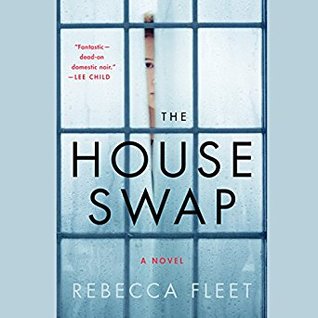 Published May 22nd 2018 by Penguin Audiobooks

I think I gave this one four stars instead of 3 or 3.5 because I listened to the audio book of this story and the creepiness factor when the stranger in Caroline’s and Francis’ house spoke was great. The narrator did an awesome job with this character. Caroline and Francis are moving into another person’s home for a week, while that person stays in theirs using a House Swap registry. They needed a getaway to patch up their tense marriage without their son, Eddie, who is staying with Caroline’s mom. A House Swap provides the perfect opportunity for a budget friendly getaway. The story is told in two timelines, home in the past and away in the present day. In the past, Caroline’s marriage was in trouble. She is having an affair with a younger man and Francis has a drug addiction. In the present, the couple seems to be working on fixing their marriage. Francis is understanding and seems to be trying but when Caroline starts to notice little signs in the house that reminds her of her past with Carl, she has trouble concentrating on her marriage. Then there is Amber, the young woman who lives across the street, who seems a bit too friendly and reminds Caroline of her past. Who is Amber? What happened in Caroline’s past? Who is the stranger living in Caroline’s flat?

This is a domestic or psychological thriller with a bit of a mystery. I like how the secrets are slowly revealed, letting the reader see what is going on and what happened in the past. Unfortunately for many readers, this might also be the downfall, that the book is too slow. It is almost 3/4 of the way through before we find out what happened in the past to cause the problems in the present. Once that is revealed the story moves quickly to the surprising twist before the bittersweet ending. The story is basically told from Caroline’s POV, but there are a few sections told by Francis and of course the mysterious voice who is wreaking havoc on Caroline’s flat. Caroline is a very unlikeable character. She changes as the story progresses, but she was not my favourite, actually, I didn’t really like anyone in this book, but that was okay. This book will be an enjoyable read if you like a slow burning mystery. If you get the opportunity to listen to this one, I say go for it, and then consider a House Swap of your own.

About the Book (From Goodreads): Be careful who you let in . . .

When Caroline and Francis receive an offer to house swap–from their city flat to a townhouse in a leafy, upscale London suburb–they jump at the chance for a week away from home, their son, and the tensions that have pushed their marriage to the brink.

As the couple settles in, the old problems that permeate their marriage–his unhealthy behaviors, her indiscretions–start bubbling to the surface. But while they attempt to mend their relationship, their neighbor, an intense young woman, is showing a little too much interest in their activities.

Meanwhile, Caroline slowly begins to uncover some signs of life in the stark house–signs of her life. The flowers in the bathroom or the music might seem innocent to anyone else–but to her they are clues. It seems the person they have swapped with is someone who knows her, someone who knows the secrets she’s desperate to forget…

About the Author: Rebecca Fleet was educated at Oxford and works in brand strategy. She lives in London. The House Swap was her US debut; The Second Wife, her second domestic thriller, is forthcoming from Pamela Dorman Books/Viking.

Check out this interview at the Washington Independent to find out more about the author.