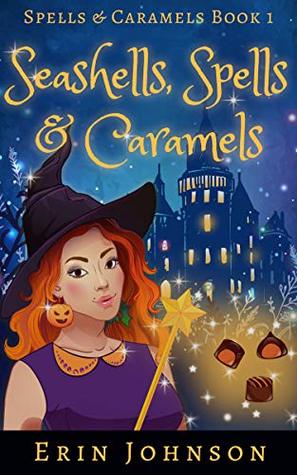 I have been seeing great reviews for this series over the last year, but when I read the synopsis, I thought this really is not my cup of tea, but those positive comments kept coming. I finally decided to take the plunge. This story was totally unexpected and thoroughly enjoyed. It is a cozy mystery but has aspects of a Harry Potter type story. We have a witch that had no idea she was a witch, a magical land (an island off the coast of France), fantastical creatures, talking flames and more. When the murder occurs, our main character, Imogene is a suspect mainly because she is an outsider who had a misunderstanding with the victim. Throw in a cooking contest, a couple of handsome men, a best friend and you have a great story. It was excellently written, humorous, wonderfully descriptive, fantastic characters and the contained all the qualities of a great cozy mystery. With all my trepidation, I wished I had picked this one up earlier as I now have a lot to catch up on. If you like cozy mysteries, especially if they are different, and can suspend reality and enjoy a fantasy world, then I recommend you pick this book up and get to know Imogene, Maple, Hank and the others.

About the Book: A magical French island. A dead contestant. An aspiring baker must clear her name before she gets burned.

Imogen Banks has dreamed her entire life of opening her own bakery in Seattle. But when she accidentally sets fire to her apartment and loses all her possessions, her dreams get toasted. Still coping with her loss, she receives a cryptic invitation she can’t possibly refuse: entry into a mysterious baking competition on a beautiful French island.
When Imogen realizes the island village is magical and the bake-off’s participants are witches and wizards, she’s not sure her fledgling powers will be enough to win the coveted contest. In the midst of trying to cast her very first spell, a competitor drops dead and Imogen finds the psychic judges’ mystical fingers all pointing at her. Can Imogen unlock her own magic and stop the killer from coming back for seconds or will she jump straight from the frying pan and into the fire?

Seashells, Spells & Caramels is the first book in a charming paranormal cozy mystery series. If you like funny heroines, mysterious magical communities, and quirky conspiracies, then you’ll love Erin Johnson’s perfectly witchy recipe.
With a killer on the loose, a missing prince, and the Summer Solstice Festival fast approaching, Imogen will have to bake like her life depends on it- because it just might.

ABOUT THE AUTHOR: Erin Johnson is a native of Tempe, Arizona, Erin spends her time crafting mysterious, magical, romance-filled stories that’ll hopefully make you laugh. In between, she’s traveling, napping with her dogs, eating with her friends and family, and teaching Pilates (to allow her to eat more).