Out of the Mist (Stewart Sisters #1) by JoAnn Ross 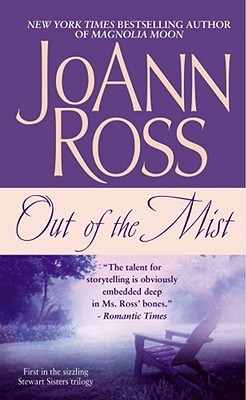 I picked this book up at a used book sale and after finishing it, I have purchased the next two in the trilogy. This is the story of Lily Stewart, a lovely woman working in the small town of Highland Falls; running a small gallery, taking care of the family home “Stewart’s Folly” a castle built by her ancestors and now running as an inn, and organizing The Highland Games. When she meeting Ian MacKenzie, a documentary maker, she tries to convince him that making a documentary of their Highland Games is a wonderful idea. What she doesn’t know is that he is a member of the MacDougall clan, an enemy of the Stewarts, and he is in Highland Falls to steal the Brooch of Lorn, which was torn from the cloak of “The Bruce” back in the 1600s. The brooch has been stolen back and forth between the two families for generations. The thing neither Ian or Lily were prepared for was that they would fall in love.

The story is told in the present by Lily and Ian, but there are several flashbacks to various times narrated by ancestors of both of them. This is a very character driven story. I enjoyed meeting the various member of the Stewart family. Lily’s grandmother, Annie, is blind but functions so well in the home, it is hard to tell. Her aunts, Zelda and Melanie are so different from one another, but family is important to both of them. We briefly meet Lily’s sisters, Lark and Laurel, but their stories will be told in the next two books. When Ian’s grandfather shows up in drag, it adds a humorous dimension to the story. This was a wonderful story of family, love, dreams and taking chances. There were a few sexual encounters that were quite well described, so if that is not to your liking, you can skim them or perhaps skip this book. I recommend it to those who enjoy a good romance.

About the Book (From Goodreads): Following her wildly popular Callahan Brothers trilogy, national bestselling author JoAnn Ross begins the sparkling Stewart Sisters trilogy with this fun, sexy riff on the classic movie “To Catch a Thief” — with a Scottish twist Lily Stewart is busy planning the summer Highland Games at her family’s Great Smoky Mountain resort. So the last thing she needs is some arrogant, demanding Scotsman — no matter how sexy — arriving to film the annual festival. It’s bad enough that he’s constantly interrupting her days — but even worse that he’s tempting her to rev up her nights with a Highland fling.

Filmmaker Ian MacDougall MacKenzie is actually there to steal back the Brooch of Lorn, which has gone back and forth between the Stewarts and the MacDougalls ever since it was ripped from Robert the Bruce’s tartan in 1306. But when Ian realizes Lily has stolen his heart, he wonders whether love can prevail once she discovers he’s been deceiving her all along….

About the Author: New York Times bestselling author JoAnn Ross has written over a hundred novels for a bunch of publishers. Two of her titles have been excerpted in Cosmo and her books have also been published by the Doubleday, Rhapsody, Literary Guild, and Mystery Guild book clubs.

A member of the Romance Writers of America’s Honor Roll of best-selling authors, she’s won several awards, including Romantic Times’s Career Achievement Awards in both category and contemporary single title.

Currently writing a new Honeymoon Harbor series for HQN set on the Washington peninsula, that will launch in April, 2018, JoAnn lives with her husband (her high school sweetheart, who proposed at the sea wall where her Shelter Bay books are set), in the Pacific Northwest.