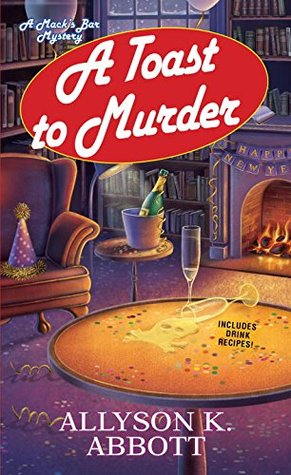 I have enjoyed the Mack’s Bar Mystery series. Learning about Synesthesia, which is a neurological glitch that mixes up the senses such as smelling or tasting something when you hear a sound or voice. This neurological glitch is a real thing and in Mack’s case, allows her to figure out clues to crimes that others will miss. The ongoing story in this series is that someone has challenged Mack. She receives letters and clues that she has to figure out within a certain time or someone is murdered. In the previous books, she has kept this a secret from her friends and fellow bar detectives, but is not thinking that the person responsible for the murder of some of her friends and acquaintances is someone close to her and/or her bar. Her plan is to have a private New Year’s Eve party and determine not only who the killer is, but their accomplice and get them to confess.

A Toast to Murder contains good writing and has a nice flow making it easy to read and enjoy. I will say that it is important to read these books in order or you will not be able to follow the story that continues with each book. I like Mack Dalton and her uncommon ability, although I really wanted her to make up her mind as far as which detective she really wanted to have a relationship with. I am happy to say she makes her choice in this book. This book did not showcase the Capone Club as much as in previous books. This story was pretty much Mack and the two detectives, solving this one. There was still a lot of computer work and sneaking around listening to conversations, but I missed some of the main characters from the other stories. The mystery is complex and it has developed over the five books in the series. There were plenty of suspects, and most readers, myself included, will be surprised when the guilty party is revealed. The clues pointing to the person’s identity are subtle, but in hindsight, you can see them. I was glad to see this storyline come to a satisfactory ending and look forward to what is next for Mack and The Capone Club.

About the Book: Mack Dalton has named plenty of murderers since she and her barstool detectives began cracking cold cases. But as a new year looms, time is ticking on the hunt for her craftiest villain yet . . .

As Milwaukee counts down to New Year’s Eve, bar owner Mackenzie “Mack” Dalton has but one resolution—unmask the dangerous mastermind who has been taunting her and killed bouncer Gary Gunderson. Mack and her fellow barflies have fleshed out a suspect and arranged an invite-only party to put a cork in the murderer’s game for good. But when the clock strikes midnight and their suspect is found cold and stiff on the basement stairs, it seems the celebration may have come too soon. Now Mack must rely on her special talents to find the real criminal among the crowd of revelers—or someone won’t survive until last call . . . 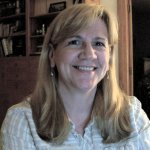 About the Author: Beth Amos, also publishes under the pseudonyms of Annelise Ryan and Allyson K. Abbott.  Beth’s varied writing career has included a stint as a book reviewer and several years of nonfiction freelancing. Now she writes only fiction, and in stark contrast to her “day job” as an ER nurse where she gets to save lives, the one common factor in her fiction, no matter what name it’s written under, is that someone always dies.

As Annelise Ryan she writes a mystery series featuring the wry, and often politically incorrect, nurse-turned-coroner.

Beth has her pseudonyms in part because she figures her current ER patients might not be comfortable knowing she spends her spare time thinking up devious and clever ways to kill people. As Beth Amos she wrote three thrillers that were published by Harper Collins in the late ’90s that she has re-released as e-books: COLD WHITE FURY, EYES OF NIGHT, and SECOND SIGHT. In addition she has self-published two additional thrillers: NICK OF TIME and FACE OF DEATH, available from most online book  vendors.

6 thoughts on “A Toast to Murder (Mack’s Bar Mystery #5) by Allyson K. Abbott”