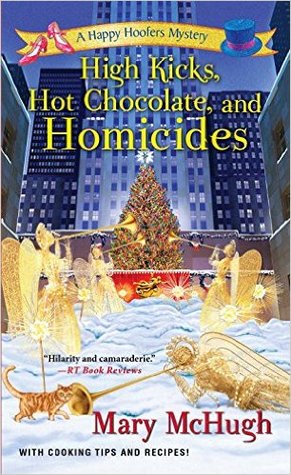 I have read four books in this series and liked this one the least. In this outing with the Happy Hoofers, Tina, Janice, Pat, Mary Louise, and Gini are joining the Rockettes in New York City for their annual Christmas performance. Set to dance to Santa Claus is Coming to Town in 40 lb big-bellied Santa outfits, the ladies are ready to start daily rehearsals with the famous Rockettes. As usual, there is a murder shortly after the book starts, this time, the head Rockette Glenna Parsons is found dead under the stage, mangled by machinery. The show must go on, and with a new Rockette established as being in charge, the Hoofers try to prepare for their upcoming performance.

This book was extremely predictable. It was told from the point of view of Mary Louise, aka Weezie, the cook in the group. The ensuing “adventure” where more murders occur and Mary Louise is in danger just unfolded in a rather ho hum way. So, why did I finish this book. I enjoyed the travelogue part of the story. I learned about things to see in New York City that I did not know about. I also liked the recipes that were shared. I did not like the way Mary Louise was dealing with her relationships with her husband George and her “boyfriend” Mike. The way she talked about George to Mike seemed unfair as George was not aware of her relationship. This story was a very quick read, a few hours sitting in the sun in Florida. I am assuming that this is the last book in this series as it was published back in 2016. I did enjoy the first books in this series more than this one and have one prior to this that I will read to get the full picture of the stories of these five, fun and fit women.

About the Book (From Goodreads): Murder takes center stage . . .

It’s a Christmas miracle for the Happy Hoofers—Tina, Janice, Pat, Mary Louise, and Gini. They’ve scored a gig at New York City’s Radio City Music Hall with the legendary Rockettes, complete with sexy Santa suits and microphones on their shoes. But when a dazzling diva of a dancer is found dead under the stage, there’s quite a lineup of suspects. In between rehearsals and seasonal sightseeing—and the discovery of a multi-talented, multi-colored cat—the toe-tapping troupe has to sort out the intrigue before another victim kicks the bucket . . . 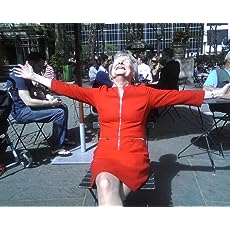 About the Author: I have published 27 books on subjects ranging from feminism to Crotchety Old Men. I worked for The New York Timesfor their special sections, including “Sophisticated Traveler” and “Fashions of the Times.” I wrote for the “Arts and Leisure” and “Travel” sections for The Times, and my article, “Telling Jack” in the Hers column of the Sunday Timesmagazine was nominated for an award for best personal essay by the American Society of Journalists and Authors. Two of my articles for Family Circle have been nominated for awards by the American Society of Magazine Editors.

My book, Special Siblings: Growing Up with Someone with a Disability,published in paperback by Brookes Publishing Co., was awarded a prize for Special Recognition of a National Project by The Arc of New Jersey.

I worked as an articles editor at three national magazines and was a contributing editor for Cosmopolitanmagazine for 10 years.

My work has appeared in The New York Times, Good Housekeeping, and Family Circle magazine.