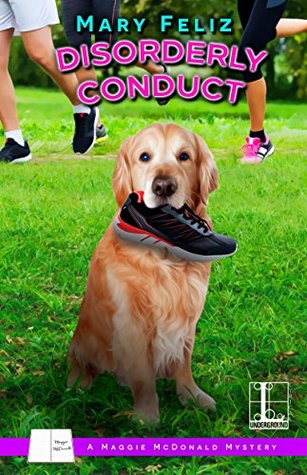 This is the fourth in the Maggie McDonald Mystery series, but can be read as a standalone. I have read and/or listened to all of them and I think this one was my favourite so far. Maggie is a professional organizer and this book shows how her skills can be used in other areas besides organizing a house. In this book there are wildfires and each chapter begins with a tip of what you can do in advance of a disaster where evacuation could occur. There are also some great resources at the end of the book. Having shared that, here is my review of the book.

With wildfires ripping through the canyons, Maggie and her family are worried they might have to evacuate. At the same time, Maggie’s friend Tess, gets a phone call that her husband has been found dead on the trails he ran on in the canyon. Knowing that he could not have fallen on the familiar trails, his son Teddy is sure someone killed him. Once that is confirmed, Tess is arrested for his death. Maggie calls her lawyer to help with getting Teddy settled with their family as well as helping Tess. As the story unfolds, there are a lot of clues, some red herrings and several suspects. I thought I knew who the murderer was, then changed my mind. Along with the murder, there are also issues with drugs and cartels having several grow-ops hidden around the canyon. Along with the drugs comes some environmental issues and human slavery. Once another law enforcement agency steps in, Jason is left with only an advisory role which he worked to his advantage. There were several twists, new characters and environmental issues all part of the plot. Mary Feliz does a wonderful job with these varying stories all woven together to write a great story. I definitely recommend this one to cozy mystery lovers, especially if you like a different twist on a story. The publisher, Lyrical Underground, generously provided me with a copy of this book upon my request. The rating, ideas and opinions shared are my own.

About the Book (From Goodreads): Professional organizer Maggie McDonald manages to balance a fastidious career with friends, family, and a spunky Golden Retriever. But add a fiery murder mystery to the mix, and Maggie wonders if she’s finally found a mess even she can’t tidy up . . .

With a devastating wildfire spreading to Silicon Valley, Maggie preps her family for a rapid evacuation. The heat rises when firefighters discover the body of her best friend Tess Olmos’s athletic husband—whose untimely death was anything but accidental. And as Tess agonizes over the whereabouts of her spouse’s drop-dead gorgeous running mate, she becomes the prime suspect in what’s shaping up to become a double murder case. Determined to set the record straight, Maggie sorts through clues in an investigation more dangerous than the flames approaching her home. But when her own loved ones are, can she catch the meticulous killer before everything falls apart?

Address to Die For, the first title in the six-book series, was named a Best Book of 2017 by Kirkus Reviews. All of her books have graced Amazon’s best seller list. A resident of Northern California for decades, she now lives on Monterey Bay, enjoying the area’s myriad natural treasures. She attends organizing conferences in her character’s stead, but Maggie’s skills leave her in the dust.

Northern California is my home. I love its foibles and the easy access to some of the most beautiful coastal and mountain terrain anywhere. The traffic? Not so much. California hasn’t always been home—I’ve lived in five states and two countries. Traveling to other areas, I’m frequently reminded that what seems normal in the high-tech heartland can seem freakish, odd, or even alarming to the rest of the country. (For instance, various readers have commented on how strange it is that Maggie’s children don’t ride to school on the bus—but most Bay Area communities haven’t had school buses since the 1970s due to the state’s unusual school funding system and the inevitable budget cuts.)

I’m delighted by irony, serendipity, diversity, and quirky intelligence tempered with gentle humor, and I strive to bring these elements into my writing. My characters, however, tend to take my manuscripts in directions I’ve never imagined. It can be a wild ride, but I love it when Maggie and her friends take charge. For more information on Mary Feliz visit her website at: http://www.maryfeliz.com/