Murder, She Knit (A Knit & Nibble Mystery #1) by Peggy Ehrhart 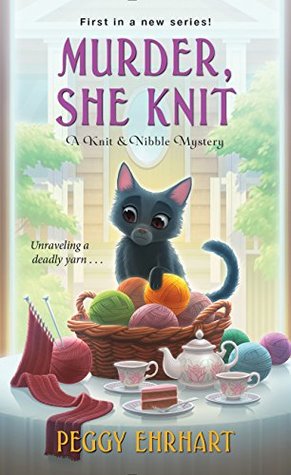 3.5 stars rounded up. Murder, She Knit is the first book in the new Knit & Nibble Mystery series. This book has everything I like in a cozy mystery. There is a cute pet (a cat in this case), a group of women and one token male (a knitting group called The Knit and Nibble group), a dead body found in the front garden of our MC and of course an amateur sleuth. What this one doesn’t have is a romantic interest and that was just fine with me.

Ous main character, Pamela Paterson, is a widow and her daughter has left home to attend college. She is a empty nester and keeps herself busy by editing articles for a fiber crafts magazine. She is the unofficial leader of the Knit and Nibble, has a best friend who lives across the street and is a very friendly and smart woman. When she runs into an old acquaintance on the street, she immediately invites her to attend their meeting that night at her home. The members of the knitting group are all very different from one another, yet get along well together. They are not all without problems and that not only adds to the story, but provides a couple of red herrings as well. The mystery moves along at a nice pace with a simple plotline. There were several suspects and a few twists along the way, but when the reveal came, I was a bit surprised. It seemed to come quickly and although it made sense, there were not really any hints along the way so it was a bit abrupt. It was an enjoyable story, but I would like to see more quirkiness and clues along the way. I did enjoy the stray cat that Pamela fed and eventually he moved into her home. I will continue with this series to see what is next for the Knit and Nibble group. The publisher, Kensington Publishing, generously provided me with a copy of this book to read upon my request. The rating, ideas and opinions shared are my own.

About the Book (From Goodreads): Since her only daughter left for college, widow Pamela Paterson has kept busy as associate editor of a craft magazine and founder of the Knit and Nibble knitting club in quaint Arborville, New Jersey. Now, she’s trying out a new hobby—solving murders!

Pamela is hosting the next Knit and Nibble meeting and can’t wait to liven up her otherwise empty home with colorful yarn, baking, and a little harmless gossip. She even recruits Amy Morgan, an old friend who recently moved to town, as the group’s newest member. But on the night of the gathering, Amy doesn’t show. Not until Pamela finds the woman dead outside—a knitting needle stabbed through the front of her handmade sweater . . .

Someone committed murder before taking off with Amy’s knitting bag, and Pamela realizes that only she can spot the deadly details hidden in mysterious skeins. But when another murder occurs, naming the culprit—and living to spin the tale—will be more difficult than Pamela ever imagined . . . 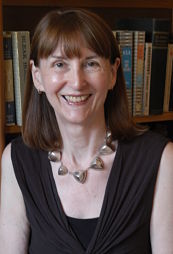 About the Author: Peggy Ehrhart is a former English professor with a Ph.D. in Medieval Literature who now writes mysteries. Her publications include a prize-winning nonfiction book; she has also won awards for her short fiction. Her blues mystery series was inspired by her guitar-playing hobby. She currently writes the very cozy Knit & Nibble mystery series for Kensington. Murder, She Knit and Died in the Wool are now out. Knit One, Kill Two will appear in May 2019. Three more Knit & Nibble mysteries are in the works.