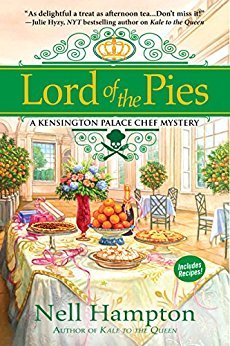 In the first book in the Kensington Palace Chef Mysteries, we met Chef Carrie Ann Cole who had been hired by the Duchess of York to be the family chef at Kensington Palace. Although this is the second book in the series, it will work fine as a standalone. Carrie is no longer a newbie to the palace, but there are some who still think an American has no business cooking at Kensington Palace. She is still trying to prove herself to the head chef and he is still giving her a hard time. She recently put on a wedding shower and one of other chefs allowed her to use his kitchen. As a thank-you, she left him a lemon meringue pie. When one of the servers ends up dead in the pie and it is found to be poisoned, Carrie is an immediate suspect. In order to save her reputation, she needs to solve the murder. There’s multiple murders in this one, which provides a lot of clues and avenues to pursue. Carrie has clearly become a better detective since her first crime, but she still depends on the interesting and somewhat colorful staff in the Royal Palace.

One of the things I like about cozies is that even though there are a couple of murders, there is not graphic violence. If you enjoy culinary cozies, this is a series for you. There is a lot of eating, baking and discussing food, as well as a bit of romance, some humour and wonderful character development. The setting of this series is quite interesting. There are four different kitchens at the palace and the murder in this one takes place in the Orangery. I enjoyed the descriptions of the various areas of the palace. Carrie is likable as a heroine, and the staff she employs respect her and want her to be successful. The formality and security at the palace are quite stringent and at one point, Carrie has to take classes to make sure she understands the staff manual after meeting with someone from the press. I enjoyed the plot and story of this book. I didn’t figure out who the culprit was until the end of the book, but had a few inklings here and there. I did find that the ending was fast and furious with the reveal coming quickly after a longer buildup. The motive of the killings was believable and the other characters involved were also interesting and added much to the story.

If you’re a fan of cozy mysteries that are more realistic, with a more serious storyline, then pick this book up, in fact, you might want to go back and start with the first one in this series. There are some recipes included at the end that sound wonderful. I listened to the audiobook of this story and the narrator, Romy Nordlinger, and she did a fantastic job with the voices, accents and dialogue. I will watch for more audiobooks she narrates.

About the Book (From Goodreads): When Carrie Ann Cole bakes a lemon meringue pie to die for that actually kills someone, she must find out who the real killer is before her time at the Kensington Palace expires.

The elegant Orangery at Kensington Palace is the perfect setting for the bridal shower of Carrie Ann Cole’s best friend’s sister. Personal chef to the royal family, Carrie Ann’s pie theme is naturally winning. But a waiter later keels over dead into the lemon meringue pie she leaves as a thank-you to the staff and Carrie Ann realizes that somebody slipped a mickey into that meringue.

Her floury fingerprints are all over that pie and the authorities suspect her distress is a cover-up for murder. Carrie Ann must set out to clear her name if she wants to stay at her dream job any longer. But all too soon, another body drops in the Orangery. This time, it’s the Orangery chef.

Murder won’t crimp her style, and as bodies pile up, Carrie Ann uncovers palace intrigue, London nightlife, and British pies scouring for the killer in Lord of the Pies, the witty follow-up to Nell Hampton’s Kale to the Queen.

About the Author: Nell Hampton enjoys a good mystery. She is lucky enough to indulge her love of a good who dunnit by writing mystery series. Fun settings, quirky characters, yummy recipes and pets of all shapes and sizes fill the pages of her multiple, award-winning series. Nell writes as Nancy Coco, Nancy J Parra and Nell Hampton. Her books have hit national best seller lists and book clubs. You can also find her stories in audio books and large print. Her writing has been called witty and her protagonists plucky by reviewers around the world.  Nancy is a member of Sisters in Crime, Mystery Writers of America and writes for the Killer Character Blog on the 8th of every month.  Nancy loves to hear from readers.

About the Narrator: Romy is an NYC based actor and best selling audiobook narrator and has recorded over 200 audiobooks for publishers such as Tantor, Oasis, Eljin, Mindspring/Dufris, Dreamscape, Deyan, Harper, Podium, Recorded Books, Audible and many more. Critical acclaim in Audio File magazine, Library Journal and many others. Romy has narrated in every genre including Mystery, Romance, Sci-fi, Chick-Lit, Self-help and Non-fiction. She also has a strong command of language and dialects and has recorded titles in a plethora of accents ranging from Russian to British and back around the globe again. Some film credits include featured roles on Bull, Law & Order (Officer Talbor), All My Children, and Real Life and has starred in dozens of productions Off Broadway and regionally.  Romy recently wrapped recording of the featured voice role of Edna in Florence Foster Jenkins starring Meryl Streep, directed by Stephen Frears and voiced multiple characters in Shrek creator’s Monster Hunt. A passionate bookworm and actress, nothing brings Romy more joy than bringing a book to life by fully embodying its characters and faithfully telling its story with all her heart.