Swimming in the Deep End by Christina Suzann Nelson 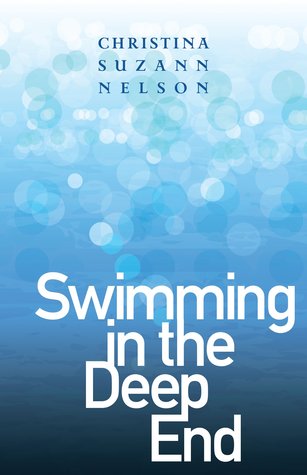 This is a truly character driven story that evoked the full gamut of emotions in this reader. The story covers many issues including destroyed dreams, teen pregnancy, abortion, miscarriage, adoption, estranged family members, marital discord, tragic death, grief, and secrets. There are four different points of view: Jillian, who struggles with choices from her past and how the secrets affect her life, Izzy, who is Jillian’s high school aged daughter who discovers she is pregnant as well as dealing with the grief of the death of her baby daddy and her part in it, Margaret who is the mother of Travis, Izzy’s boyfriend who dies in a tragic accident and Stacey who so wants to be a mother, but is still dealing with her own grief and secrets.

I do not want to ruin this story for anyone so will talk about my feelings while reading this book. The characters in this story felt so real. The problems and their reactions to various situation were genuine and I could feel a real empathy for them. The girls in the house were all young and trying to make the best of the situation they found themselves in. I wish there was such a place around here as it really seemed to be helping these young women and their babies. As I read, I became invested in the stories of all the characters and yes, tissues were needed. The church families involved were amazing. There was acceptance of the girls and their situations, support of the home and a lot of prayer and forgiveness. If only we could always move forward without guilt and regret at things in our past that we can not change. There were a lot of twists and turns in the story. I thought I had it figured out, knowing what Izzy was going to do, then bam, she did what? There were times that I got frustrated with the characters and their actions and/or decisions, then the next minute I was cheering for them. This was a book that once I started reading it, I didn’t stop until I finished. It was a relatively quick read, and one that I enjoyed very much. It is an emotionally packed story that will stay with you long after you finish. This is a great book for anyone who loves emotional dramas, that are realistic and will have you reading instead of doing whatever you were supposed to be doing that day or night. I received a copy of this book from Just Read Publicity to read and review. The rating, ideas and opinions are my own.

About the Book (From Goodreads): A moving novel entwining the many faces of motherly love

Jillian Cline has the perfect daughter: loving and smart, she’s an Olympic hopeful with a bright future. But when Izzy becomes pregnant, Jillian fears that future is lost. Worse, she must confront her own secret past and hope the decisions she’s made don’t drown their whole family.

Izzy can’t believe God let this happen to her. She knew the risks, but who thinks about that when they’re in love? Now she has to face the consequences–and the disappointed stares from everyone who thought she was the perfect Christian girl. At least she has the baby’s father, Travis. Nothing can tear them apart, right?

Margaret Owens had determined dreams for her son. She’s furious that Izzy’s pregnancy jeopardizes his college baseball scholarship and terrified that Travis will be trapped in a life of struggle and poverty–the life she’s tried so hard to save him from. She’ll do anything to protect him–even if it means forcing him to leave Izzy.

Stacey Frey is aching for a child of her own. But the son she was meant to adopt was taken before she could hold him in her arms. It feels like she’ll never stop mourning; even the move to this new town hasn’t distracted her from the pain. How can she and her husband find peace? Is there any hope of a family in their future?

And in the midst of all this . . . an unborn baby. Whose arms will hold him in the end?

About the Author: Christina Suzann Nelson is a member of Oregon Christian Writers. Her essays have been published in the Cup of Comfort series. Nelson lives in Oregon’s Willamette Valley with her husband and four children.