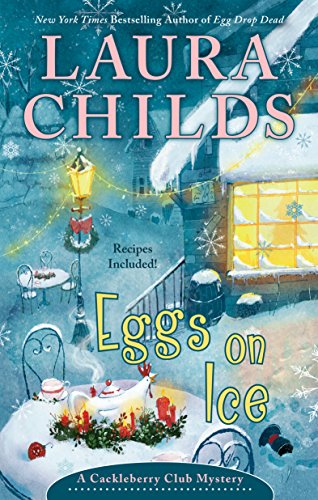 Eggs on Ice (A Cackleberry Club Mystery)
by Laura Childs

3.5 Stars – It’s Christmas season at Cackleberry Club Cafe. The town was getting ready for the Christmas Play, The Christmas Carol. During rehearsals, the scene with Scrooge and the ghost was playing out on stage in a very odd way. When the ghost exited, Scrooge was dead. Who killed Alan Sharp? He was playing Scrooge, but he was the most unliked man in town, so many people could have done it. The fact that the whole cast saw the murder, yet no one realized what was happening makes it even harder for Sheriff Doogie to figure out. When a second murder occurs and Junior’s trailer gets torched, things just become more confusing. Suzanne is once again asked for help by Amber, the main suspect. Is she risking her own safety and that of her friends?

Laura Childs is a gifted author when it comes to blending the setting and the characters into her mysteries. I would love to visit the fictional Midwestern town of Kindred in this book. This series’ strength comes from the friendship between Suzanne, Toni, and Petra. Suzanne is the ringleader when it comes to detecting and running the business. Petra is the calming influence and Toni wants to party. They all work so well together in the business with each bringing a specific talent to the enterprise. Another strength is the Cackleberry Club Café itself. This is where everyone goes to meet, gossip, and dine, which allows Suzanne to gather information and ask questions. The one thing that bothers me is the men. Sheriff Doogie can’t seem to figure anything out without Suzanne’s help/interference, Junior is a bit of a doofus and Sam, who is a doctor, can’t make a meal? I know this is a book about the women, but the men make them look bad as well. The author did a great job at keeping me guessing. Just when I thought I had it all figured out, there was a twist and I discovered I was wrong. The murder’s motive was the usual, money, yet it was barely mentioned. Overall, this was an enjoyable read, however I liked the earlier ones in the series better. The publisher provided me with a copy of this book through the First Reads Program. The rating, ideas and opinions shared are my own.

Some say that casting crusty attorney Allen Sharpe as Scrooge in the Kindred Players production of “A Christmas Carol” is just playing to type. He’s not the most beloved man in town. In fact, you’d have a dickens of a time finding someone who liked him. Still it’s a shock when the Ghost of Christmas Past stabs him during the first rehearsal. Suzanne, co-owner of the Cackleberry Club café, Kindred’s favorite combination diner, craft store and bookshop, chases the murderer out of the building but loses him in the alley.

As the days pass the list of suspects grows longer. Is it the disgruntled partner? The former secretary whom Sharpe sexually harrassed? Or is it fellow owner of the Cackleberry Club, Toni’s almost ex-husband, Junior? The women of the Cackleberry Club are determined to find the killer before he can add another victim to his Christmas list.

About the Author: Laura Childs is the New York Times bestselling author of the Tea Shop Mysteries

. In her previous life she was CEO/Creative Director of her own marketing firm and authored several screenplays. She is married to a professor of Chinese art history, loves to travel, rides horses, enjoys fundraising for various non-profits, and has two Chinese Shar-Pei dogs.

Laura specializes in cozy mysteries that have the pace of a thriller (a thrillzy!) Her three series are:

– set in the historic district of Charleston and featuring Theodosia Browning, owner of the Indigo Tea Shop. Theodosia is a savvy entrepreneur, and pet mom to service dog Earl Grey. She’s also an intelligent, focused amateur sleuth who doesn’t rely on coincidences or inept police work to solve crimes. This charming series is highly atmospheric and rife with the history and mystery that is Charleston.

– a slightly edgier series that take place in New Orleans. The main character, Carmela, owns Memory Mine scrapbooking shop in the French Quarter and is forever getting into trouble with her friend, Ava, who owns the Juju Voodoo shop. New Orleans’ spooky above-ground cemeteries, jazz clubs, bayous, and Mardi Gras madness make their presence known here!

– set in Kindred, a fictional town in the Midwest. In a rehabbed Spur station, Suzanne, Toni, and Petra, three semi-desperate, forty-plus women have launched the Cackleberry Club. Eggs are the morning specialty here and this cozy cafe even offers a book nook and yarn shop. Business is good but murder could lead to the cafe’s undoing! This series offers recipes, knitting, cake decorating, and a dash of spirituality.