Y is for Yesterday (Kinsey Millhone #25) by Sue Grafton 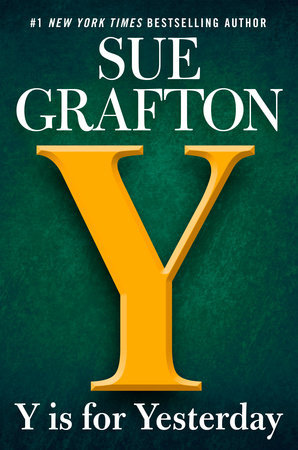 It all started with “A is for Alibi” where we met Kinsey Millhone, a Private Investigator in small town Santa Teresa, California. I have been a faithful reader of this series and liked some more than others. It was sad when earlier this year, Sue Grafton passed on. There will not be a Z is for … as she requested that another author not compete the series. This final book in the series was a bit of a hit and a miss. There were some great things about this story, but I missed the interactions at the neighbourhood bar that made Kinsey more human. There were also multiple narrators in this book which was necessary for this particular story, but I really enjoyed Kinsey’s narration.

The story has two main plot lines. The first major plot line regards a case involving extortion that Kinsey is hired to investigate. When Kinsey is hired to investigate the extortion attempt of the son in a well-to-do family, the story takes us back to 1979. There were a couple of situations. A group of privileged kids attending a private school were involved in a test stealing scandal that ended up in murder. As well, there was a rape of a fourteen year old classmate at a private party that had been recorded on tape. Fritz, the person convicted of the murder has just been released from custody and we find out he was also one of the rapists. His family is being threatened that the tape will be turned over to the police unless they pay. The other is a more personal situation for Kinsey involving a killer (from a previous book), stalking Kinsey in order to kill her. Ned has been evading the police and is now coming after Kinsey as well as one of his victims who got away. She apparently has his “trophies” from his previous murdered victims. Throw in a couple of homeless people, some pets and recollections of the kids involved in the murder and you have an interesting story that moves relatively quickly.

The story also has two timelines. We learn about the original murder through narration of the persons involved in the story. Kinsey has her hands full as she tries to get answers from some tight-lipped people. The stories do not tie together, they just happen to be occurring simultaneously. I thought that the flow of the story was very good. The books shifts perspective between Kinsey and her investigation and the events going on in her life, and then transitioning back to 1979 and focusing on different people who were involved in the events that led up to the murder of a young girl. You eventually can put two and two together and realize what happened with some of the key players but the final revelation I thought was great. I had not idea the final twist was coming. I did get frustrated with the spoiled rich kid demeanour that carries on throughout the story, but it was nice to see Kinsey not take any crap from them.

Now that the alphabet ends at “Y” I recommend that anyone who has not read this series give it a try. You might not want to read them all, but pick a few at various intervals and enjoy them. Now, as a fellow reviewer and blogger I follow (James Cuddy) said, “Goodbye, Miss Grafton and Miss Millhone. You will be missed.”

About the Book (From Goodreads): The darkest and most disturbing case report from the files of Kinsey Millhone, Y is for Yesterday begins in 1979, when four teenage boys from an elite private school sexually assault a fourteen-year-old classmate—and film the attack. Not long after, the tape goes missing and the suspected thief, a fellow classmate, is murdered. In the investigation that follows, one boy turns state’s evidence and two of his peers are convicted. But the ringleader escapes without a trace.

Now, it’s 1989 and one of the perpetrators, Fritz McCabe, has been released from prison. Moody, unrepentant, and angry, he is a virtual prisoner of his ever-watchful parents—until a copy of the missing tape arrives with a ransom demand. That’s when the McCabes call Kinsey Millhone for help. As she is drawn into their family drama, she keeps a watchful eye on Fritz. But he’s not the only one being haunted by the past. A vicious sociopath with a grudge against Millhone may be leaving traces of himself for her to find…

About the Author: Sue Grafton was a #1 New York Times bestselling author. She is best known for her “alphabet series” featuring private investigator Kinsey Millhone in the fictional city of Santa Teresa, California. Prior to success with this series, she wrote screenplays for television movies. Her earlier novels include Keziah Dane (1967) and The Lolly-Madonna War (1969), both out of print. In the book Kinsey and Me she gave us stories that revealed Kinsey’s origins and Sue’s past.

Grafton never wanted her novels to be turned into movies or TV shows. According to her family she would never allow a ghost writer to write in her name. Because of these things, and out of respect for Sue’s wishes, the family announced the alphabet now ends at “Y.”