The Lies We Told by Camilla Way 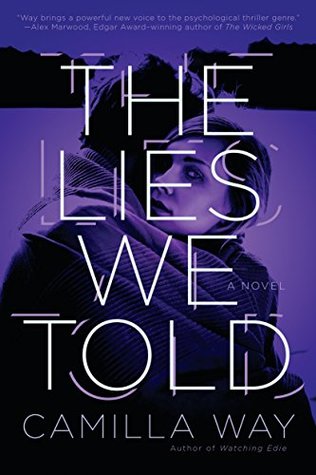 This story hooked me from the first page. It is told in two POVs, one from the past and one in the present. The stories flow, seemingly in their own individual plots. I knew they had to come together eventually, and when they did, WOW! This book had everything that I love in a psychological thriller. There was a truly evil sociopath, one who was incredibly anti-social and scary. There were also the victims, those secondary characters who were so well developed, that I cared about them, was rooting for them and found myself racing through the book to find out what was going to happen to them.

Beth and Doug have finally gotten their wish of a child after many, many years of waiting and trying. But within a few years Beth is aware that something is not right with their beautiful, charming Hannah. Hannah starts exhibiting strange, cruel and worrisome behavior at the age of 3 when she intentionally seriously injures her mother. As she gets older, her behaviour worsens and when her little brother, Toby, is born, puts him at risk. She has no friends and because of her behaviour, neither does her mother. Doug, does not see these behaviours and this puts a rift in Doug’s and Beth’s relationship. The second story is told from the perspective of Clara, a young woman who has recently moved in with her boyfriend Luke. After only living together for a short time, Luke doesn’t come home and he doesn’t call. Clara reaches out to his parents and friends but no one has seen him or heard from him. She and Mac, her and Luke’s best friend, start to investigate further and further into Luke’s life and uncovering things that they had no idea they would find. Luke’s family, all have secrets they are hiding, but what are they? Clara knows that Luke had a sister, Emily, who left the family when she was 18 and hasn’t been heard from for twenty years? When Emily contacts Clara, it opens another can of worms to investigate.

This book was well paced and kept me interested. I wanted to find out how these stories connected, and when it was revealed, I was surprised. There are so many secrets and lies it will make your head spin. My one complaint was the ending. Is there going to be a sequel? The ending did seem a bit rushed and left too many loose ends for my liking, which is why I rated it 4 instead of 5 stars.

About the Book (From Goodreads): When Clara’s boyfriend, Luke, disappears, everyone believes that he’s left her, but Clara thinks she knows the truth. Recent evidence suggests that Luke had a stalker, and Clara worries that he’s been kidnapped. Then Luke’s older sister, Emily, who vanished twenty years ago, suddenly reappears.

Emily wants to help Clara with her search for Luke, but she refuses to talk about what happened–even though it nearly destroyed her family when she vanished. And the deeper Clara digs into Luke’s mysterious disappearance, the more convinced she is that the two incidents are connected.

About the Author: Camilla Way was born in Greenwich, south-east London, and studied Modern English and French Literature at the University of Glamorgan. Her father was the poet and author Peter Way. Formerly Associate Editor of the teenage girls’ magazine Bliss, she is currently an editor and writer on the men’s style magazine Arena. Having lived in Cardiff, Bristol, Bath and Clerkenwell, she now lives in south-east London.

13 thoughts on “The Lies We Told by Camilla Way”