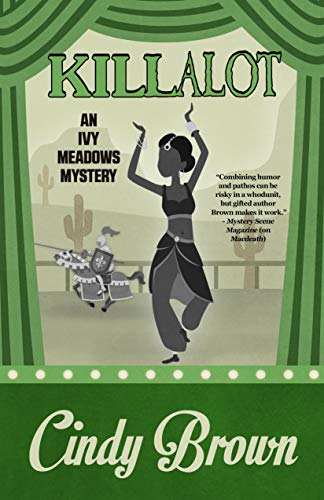 Actress Ivy Meadows, aka Olive Ziegwart, private detective is the protaganist of this humorous cozy mystery series. She is enjoying a rare day off with her boyfriend Matt, her brother Cody, and Cody’s girlfriend at the Renaissance Faire. They were lucky to get free tickets from an old actor acquaintance of Ivy’s, Riley. They are excited to watch Riley’s debut in the jousting event when a terrible accident seriously injures, Angus, the jouster that Riley is up against, or was it Riley? The jouster disappears with Riley’s horse and armor into the dessert. Riley staggers into the arena, apparently hit on the head and suffering from a concussion. Olive finds herself hired by the Faire to work undercover to find out what really happened. At the same time, Ivy finds herself undercover at the home of a Broadway writer where Riley’s horse was found. Will she be able to keep her undercover assignments straight? Will she find out what happened? Could this job land her a ticket to Broadway? Will she and Matt take the next step in their relationship?

There is a lot going on in this story, but I had no problem keeping everything straight. Along with the mystery, there is a lot going on in Ivy’s personal life that keeps her awake at night. They mystery still took centre stage, but this was more of a character driven mystery than some of the previous books in this series. So much was happening that once I started this book, I had a hard time putting it down, I wanted to know what was going to happen next. We meet a wide variety of people, most of them a bit quirky. I was disappointed that we did not see as much of her uncle in this book. This series once again pulled in broadway plays and added a lot of tongue in cheek humour. The whole idea of Camelot becoming Kennelot was a hoot and the play was so badly imagined. Things do get serious in the last part of the book when the story pulls together and Ivy/Olive finds the culprit. I had an inkling of who it was, but wasn’t positive until the reveal at the end. Fans of the series will be thrilled to see how Ivy grows in her personal life as well as her professional one. I am looking forward to the next book in this series. The publisher, Henery Press, generously provided me with a copy of this book upon request. The rating, ideas and opinions shared are my own.

About the Book: A jouster, a playwright, and a detective walk into a faire…but it’s no joke when one ends up dead.

Actress and part-time PI Ivy Meadows is thrilled when she learns that the famous playwright behind Hello Dolly Madison is in Arizona. Not so much when she realizes he’s a suspect in the murder of a Renaissance faire jouster.

As is her friend Riley. And about a thousand other people, all disguised in Renaissance costume during the fatal jousting match.

When Ivy is hired to investigate the killing, she goes undercover as a Cockney belly dancer at the faire and finagles her way into the playwright’s Kennedy-inspired version of Camelot—as Marilyn Monroe, no less.

Then, in the midst of her toughest case ever, Ivy has to solve another dilemma: Will she follow her lifelong dream of being an actor or settle down with the love of her life?

The murder investigation, the play, and real life come together in a twist that begs the question: Is there a happily-ever-after for anyone?

About the Author: Cindy Brown has been a theater geek (musician, actor, director, producer, and playwright) since her first professional gig at age 14. Now a full-time writer, she’s lucky enough to have garnered several awards (including 3rd place in the 2013 international Words With Jam First Page Competition, judged by Sue Grafton!) and is an alumnus of the Squaw Valley Writers Workshop. Though Cindy and her husband now live in Portland, Oregon, she made her home in Phoenix, Arizona, for more than 25 years and knows all the good places to hide dead bodies in both cities.

9 thoughts on “Killalot (An Ivy Meadows Mystery) by Cindy Brown”