Murder in Her Stocking (A Granny Reid Mystery #1) by G.A. McKevett 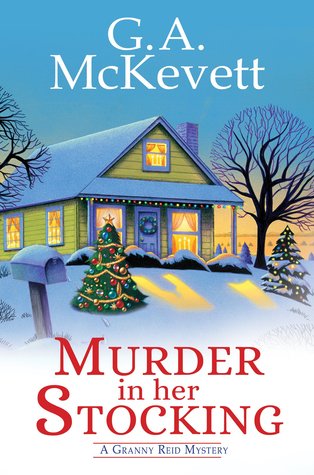 Murder in Her Stocking by G.A. McKevett is the first book in the new A Granny Reid Mystery series. This is actually a prequel series to her successful Savannah Reid series. This series goes back to the 1980s when Stella, Granny Reid, is taking care of her grandchildren as her no-good son isn’t around and her daughter-in-law is drinking and carousing instead of being home looking after her seven children. Those kids mean the world to her, and she will do whatever she can to keep them safe and make them happy.

The children are fun, normal kids who are not bad, but do make some inappropriate decisions. When Stella, and two of the kids are out fixing a mistake made by Waycross, they hear a scream. When going to investigate Stella finds Prissy Carr in the alley behind the tavern, dying. She sends the kids to the sheriff’s office and she stays with Prissy hearing her dying words. She feels bad about the murder, even though most of the women in town are rather happy that their husbands will no longer be stepping out with Prissy. With so many not caring about the death, Stella is determined not to let someone get away with murder.

This is an introduction to a new series, as well as a prequel to another, so this book seems to spend more time on the family and their situation than on the actual mystery and sleuthing. That being said, I did enjoy the southern setting, expressions and situations. This story takes place during the recession of the 80s so there is a lot of financial issues as well, but the town comes together to make sure the kids have a wonderful Christmas. I loved the expressions used by Stella and the kids.

“You don’t have the sense God gave liverwurst, and your heart’s nothin’ but a thumpin’ gizzard.”

“When that child has a mind to, she clams up tighter than a bullfrog’s keister in a bucket of ice water.”

This is a book that although this is a mystery to solve, is also about a family dealing with financial issues, a dysfunctional mother, a loving grandmother who wants to help, and a town that sticks together to help one another. I will read the next book in this series to see if the mystery becomes the central part of the story or just a back-story to the family situation. If you enjoy a book with a down home southern feel, some humour, family angst and a mystery, then this series will be for you. I listened to this book and enjoyed the author’s narration, especially with the southern drawl, although many of the voices sounded the same.

About the Book (From Goodreads): As the Moonlight Magnolia Agency revisits old memories on Christmas Eve, Granny Reid takes the reins back thirty years to the 1980s–back when she went by Stella, everyone’s hair was bigger, and sweaters were colorful disasters. But murder never went out of style . . .

Christmas has arrived in sleepy McGill, Georgia, but holiday cheer can’t keep temperamental Stella Reid from swinging a rolling pin at anyone who crosses her bad side–and this season, there are plenty. First an anonymous grinch vandalizes a celebrated nativity display. Far worse, the scandalous Prissy Carr is found dead in an alley behind a tavern. With police puzzled over the murder, Stella decides to stir the local gossip pot for clues on the culprit’s identity . . .

Turns out Prissy held a prominent spot on the naughty list, and suspects pile up like presents on Christmas morning. Unfortunately, the more progress Stella makes, the more fears she must confront. With a neighbor in peril and the futures of her beloved grandchildren at risk, Stella must somehow set everything straight and bring a cunning criminal to justice before December 25th . . . 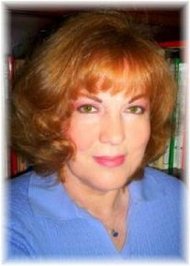 About the Author: Since publication of her first novel in 1986, Sonja Massie has authored more than 60 published works, including the highly popular and critically acclaimed Savannah Reid Mysteries under the pseudonym G.A. McKevett.  Sonja’s novels range from Irish historicals to contemporary thrillers. Her earthy humor and fast-paced plots delight her fans, while critics applaud her offbeat characterizations and incisive observations on human nature.

Irish by ancestry, Sonja has authored two non-fiction books on the history of Ireland: The Complete Idiot’s Guide to Irish History and Culture and Irish Pride: 101 Reasons to be Proud You’re Irish. Both books impart detailed knowledge of the complex and controversial Irish story with a light hand and plenty of humor. She also wrote the best seller Far and Away, a novel based on  Ron Howard’s movie, starring Tom Cruise and Nicole Kidman.

On national tours, Sonja lectures to published and “pre-published” authors  in her workshop, “The Novel Approach.” The seminar covers such topics as:  story structure, characterization, plotting, pacing, and marketing. She has taught numerous courses at university and adult continuing  education facilities including: general fiction, historical research, and  mystery writing. She was managing editor of “Single Living” magazine and has  functioned as a manuscript doctor for major publishers.  Earlier in her career, she was a prolific ghostwriter for celebrities and professionals.

Having lived in Los Angeles, Toronto, and County Kerry, Ireland, she now  resides in New York with her husband. Her hobbies include: making jewelry, origami, Irish folk music, Celtic beading and needlework, and playing with her “grand-angels.”

7 thoughts on “Murder in Her Stocking (A Granny Reid Mystery #1) by G.A. McKevett”