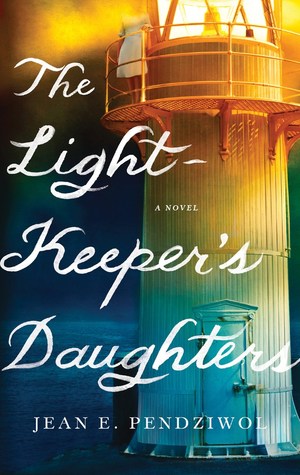 The story is told by two narrators. First, we have the perspective of Morgan, a teenage girl, being raised in foster homes after the death of her grandfather. When she tags a fence at a senior residence, she is given community service at the home. Reluctantly she begins to scrape and repaint the fence. While completing her job, she meets a blind, resident named Elizabeth. While talking to her, she finds out she used to live on Porphyry Island with her parents, brothers and twin sister Emily. Her father was the lighthouse keeper and his journals have just been delivered to Elizabeth, having been found in the beached boat belonging to her brother Charlie. Elizabeth is the second narrator of this story. It is told in two timelines, the past being read from the journals and being told from Elizabeth’s memories, and then there is the growing relationship in the present between Morgan and Elizabeth.

This is a beautifully written story. The setting is amazing, who wouldn’t want to live in a lighthouse on an island in one of the largest lakes in North America, Lake Superior. The idea of the secrets that are written in the journals from the past, coming to light in this shared manner is intriguing. I loved how they were revealed, bit by bit, page by page. It wasn’t until about halfway through the story that I began to suspect a few things, and a mystery began to reveal itself. I don’t want to share anymore about this story, because I do not want to ruin this book for anyone. At first I found Morgan hard to take. She was crude, short tempered, and a bit nasty. Elizabeth was soft spoken, very sharp and could be a bit flippant when she wanted to be. Eventually, they became friends and learned to read each other very well. As they shared the history of Elizabeth, her family and Porphyry Island, they blended well, like they had known each other all their lives. Elizabeth’s story is well written, and it was actually based on journals found in the lighthouse, although the real family was much larger. As the story went on, I developed a real empathy for both Morgan and Elizabeth. Their lives were irreparably changed by situations beyond their control, the love they had for family members and their will to survive and take care of things. It was easy to admire and respect both these women.

This book was a family drama, historical fiction, and a mystery all woven together by a wonderful author that created a book that needs to be read slowly, digested and thought about. I read this book over several days, and am sad that it is now ended. This is the first book I read by Jean E. Pendziwol and this one was recommended to me by The Traveling Sisters. I am so glad I picked this one up.

About the Book (From Goodreads): Though her mind is still sharp, Elizabeth’s eyes have failed. No longer able to linger over her beloved books or gaze at the paintings that move her spirit, she fills the void with music and memories of her family—a past that suddenly becomes all too present when her late father’s journals are found amid the ruins of an old shipwreck.

With the help of Morgan, a delinquent teenage performing community service, Elizabeth goes through the diaries, a journey through time that brings the two women closer together. Entry by entry, these unlikely friends are drawn deep into a world far removed from their own—to Porphyry Island on Lake Superior, where Elizabeth’s father manned the lighthouse seventy years before.

As the words on these musty pages come alive, Elizabeth and Morgan begin to realize that their fates are connected to the isolated island in ways they never dreamed. While the discovery of Morgan’s connection sheds light onto her own family mysteries, the faded pages of the journals hold more questions than answers for Elizabeth, and threaten the very core of who she is.

About the Author: Jean E. Pendziwol is an award winning Canadian author of books for adults and children. She was shortlisted for the Governor General’s Award and the 2014 TD Canadian Children’s Literature Award for Once Upon a Northern Night (Groundwood Books, 2013). Her children’s books include the critically acclaimed No Dragons for Tea: Fire Safety for Kids (and Dragons) (Kids Can Press), which continues to be used as a valuable resource for teaching fire safety. Her debut adult novel, The Light Keeper’s Daughters will be published by HarperCollins in 2017. Jean’s latest children’s book, Me and You and the Red Canoe, (Groundwood Books) will also be released in 2017. She lives in the shadow of the Nor’Wester Mountains near Lake Superior and draws inspiration for her stories from the rich history, culture and geography of northwestern Ontario, Canada. She has three adult children, a loveable mutt, and a coop of temperamental chickens, all occasionally tormented by visiting deer, foxes, wolves and bears.

26 thoughts on “The Lightkeeper’s Daughters by Jean E. Pendziwol”