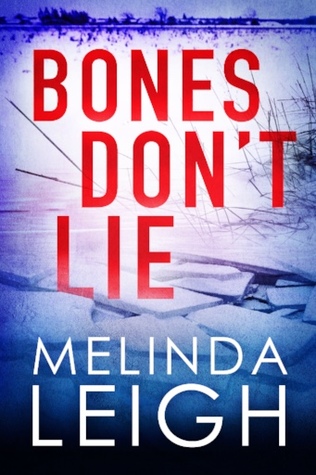 Bones Don’t Lie by Melinda Leigh is the third installment of the Morgan Dane series and the best so far. This series touches so many genres from crime, romance, suspense and even family relationships/dynamics thrown in. Each book in the series has featured a new case for lawyer, Morgan and P.I.s Lance Kreuger and his boss to investigate. This book is Lance’s story. I would suggest that the reader start at the beginning of this series as there is a lot of character development and information about their back stories that are important to fully enjoying this book.

The book opens with a car has being pulled from a lake The car belongs to Lance’s father, a man who has been missing for over 20 years. In the trunk is a body, a woman’s body. Who is it and where is Lance’s father? Morgan knows that this case is a tough one for Lance to get involved in, but she knows he will not step aside. He wants to finally get closure regarding his father’s disappearance for both himself and his homebound (agoraphobic) mother, Jenny. As they start asking questions, it becomes apparent that Morgan has a stalker. She finds out that someone they put in jail in a previous story, has been set free, so now she has another thing to worry about.

I am really enjoying this series. Morgan and Lance are a great team, a lawyer and a retired police officer. I enjoyed the storyline that has Morgan and Lance developing a relationship and his acceptance by her girls. He is becoming the strong male figure in their lives and not only is this benefiting the girls but Morgan and Lance as well. The case/crime they are investigating is interesting. How do you find out what happened over twenty years ago? There are a few deaths that follow in their wake and several scary moments, that had me on the edge of my seat. There were just enough twists to make it interesting and the culprit was hidden in the open, as is often the case. I have been listening to this series via Kindle Unlimited and the narration is wonderful. It is easy to determine which character is speaking and the action is intensified with the voice. I definitely recommend this series to lovers or Romantic Suspense, Crime and Private Investigator stories.

About the Book (From Goodreads):

Private investigator Lance Kruger was just a boy when his father vanished twenty-three years ago. Since then he’s lived under the weight of that disappearance—until his father’s car is finally dredged up from the bottom of Grey Lake. It should be a time for closure, except for the skeleton found in the trunk. A missing person case gone cold has become one of murder, and Lance and attorney Morgan Dane must face the deadly past that’s risen to the surface.

For Lance, the investigation yields troubling questions about a man he thought he knew. But memories can play dirty tricks. For Morgan, uncovering each new lie comes with a disquieting fear that someone is out there watching, because someone is killing every witness tied to this decades-old crime. Morgan and Lance follow in the shadows of a relentless killer and walk right into the cross fire.

About the Author: Wall Street Journal bestselling author Melinda Leigh is a fully recovered banker. A life-long lover of books, she started writing as a way to preserve her sanity while raising her kids. Over the next few years, she learned a few things about writing a book. The process was much more fun than analyzing financial statements, and she decided to turn her hobby into a career. Melinda’s debut novel, SHE CAN RUN, was nominated for Best First Novel by the International Thriller Writers. She is a RITA® Award Finalist and has earned three Daphne du Maurier Award nominations, two Silver Falchion Awards, and a Golden Leaf.

Melinda holds a 2nd degree belt in Kenpo Karate. She’s dabbled in Arnis stick fighting, studied Brazilian Jiu-Jitsu, and taught women’s self-defense. She lives in a messy house in the suburbs with her husband, two kids, a couple of shelter dogs and two rescue cats who clearly run the show. With such a pleasant life, she has no explanation for the sometimes dark and disturbing nature of her imagination.

Follow Carla Loves To Read on WordPress.com
Join 2,650 other followers