My second read this week is Don’t Let the Pigeon Drive the Bus by Mo Willems. 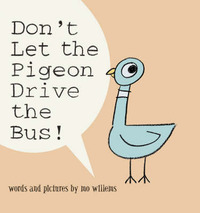 As the story opens, a friendly bus driver asks the reader to watch his bus, and whatever happened, Don’t Let The Pigeon Drive the Bus. Of course the pigeon appears as soon as the driver leaves with one request, he wants to drive the bus. I really like this idea. Young children can read or listen to this story and see the pigeon try to cajole, weedle, whine and even have a major tantrum to get what he wants. My grandson thought the pigeon was funny, and was sure he never acted like that. The book is humorous, the pigeon is silly and tries all the sorts of excuses to be allowed to drive the bus. Of course the reader is supposed to say no to the pigeon, but my grandson kept saying yes and then laughing. We had fun reading this one. The illustrations are very simple, pretty much just the pigeon, but they did not need any more than that.

10 thoughts on “Don’t Let the Pigeon Drive the Bus! (Pigeon) by Mo Willems”