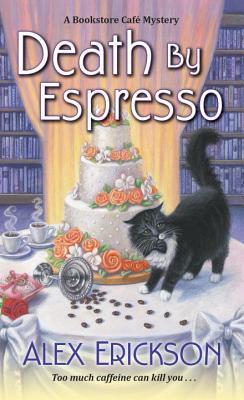 Death by Espresso is the sixth book in the Bookstore Cafe Mystery series by Alex Erickson. If you have not read any of the others, you can still enjoy this book as it can be read as a stand alone. Krissy Hancock, a smart, savy sleuth who is not afraid to laugh at herself and her mistakes is back trying to solve another murder in their small town.

Vicki, Krissy’s best friend and partner in the Cafe, and Mason are getting married. Everything is planned and ready to go. Krissy heads off to the airport to pickup her dad as well greet Vicki’s parents. What she does not expect is the entourage that arrive with Vicki’s parents, one of them being a famous wedding planner, who pops chocolate covered espresso beans like candy. Vicki and Mason are not happy about her parent’s interference. The murder happens fairly quickly in the story and of course, Krissy discovers the body. There are many suspects, some twists, a lot of clues and of course, Krissy’s sometimes bumbling discoveries.

I found that there was not a lot of action in this book, and at times it was a bit slow. It is surprising that Krissy handles, her job (not mentioned of it or the cafe in this book), the sleuthing as well as her duties as maid of honour for Vicki’s wedding which required her to keep the peace with Vicki and her fiancée and both sets of parents. This caused much of the drama in the story. When the reveal happened, I thought “Oh, really” as it was not climactic at all. One other thing that I liked is that the relationship between Krissy and Will seems to be over and maybe, she might try again with Paul, one can only hope.

If you enjoy a cozy mystery with a colourful cast of characters, a pet or two, and a coffee shop/bookstore setting, then give this series a try. The publisher, Kensington Publishing, provided me with a copy of this book to read. The opinions/ideas stated are my own.

About the Book (From Goodreads): Bookstore-café owner Krissy Hancock has plenty to keep her occupied outside business hours, like preparing for her best friend’s wedding and solving a murder . . .

Krissy is meeting Vicki’s parents at the Pine Hills, Ohio, airport–it’s the least she can do as maid of honor, even if her relationship with Mr. and Mrs. Patterson is a bit strained. Besides, her own dad is coming in on the same flight. But there are a few additional arrivals, too. Her father’s brought a date–and the Pattersons, both actors, seem to have an entire entourage trailing behind them.

Uninvited guests are a headache–especially when one turns out to be, allegedly at least, the most important wedding planner in all the world. Though Vicki and Krissy have already made arrangements for a small, simple party, Vicki’s snobby drama queen mother has her own ideas. Cathy the wedding planner is raring to go, possibly energized by the chocolate-covered espresso beans she compulsively munches. But while the caffeine keeps her awake, it doesn’t keep her alive–and after Cathy chokes on an espresso bean after being hit in the head, Krissy has to find out who ended her supposedly stellar career . .

About the Author: Alex Erickson has always wanted to write, even at a young, impressionable age. He’s always had an interest in the motive behind murder, which has led him down his current path. He’s always ready with a witty—at least in his opinion—quip, and tries to keep every conversation light and friendly. Alex lives in Ohio with his family and resident felines, who provide endless amounts of inspiration. You can visit him on Twitter at https://twitter.com/AEricksonbooks and on Facebook at: https://www.facebook.com/alexericksonbooks.