Tying the Scot (The Highlanders of Balforss #1) 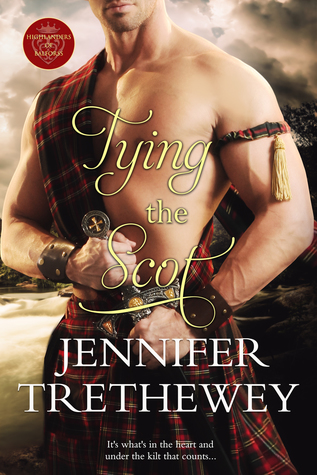 Now a man, hotheaded Alex has difficulty convincing Lucy—who would rather starve to death than marry a vulgar Scot—to go through with the arranged marriage. Once Lucy arrives in Scotland, she cannot resist the magic of Balforss or the allure of her handsome Highland warrior. But when Alex seemingly betrays Lucy right before their wedding, she is tricked into running away. Alex must rein in his temper to rescue his lady from unforeseen danger and Lucy must swallow her pride if she hopes to wed the Highlander she has come to love.

My Review: I very much enjoyed this story. I read the second book in this series first, however that did not cause me any problem while listening to this one. The Sinclair family is full of huge, handsome and loyal men. When Alex Sinclair turns twenty, his father, Laird John, and his father’s best-friend, The Duke of Chatham, arrange for the marriage of their children. Lucy is illegitimate and her father sees this as a great opportunity to get away from the snide comments in London, as well as to get a wonderful husband. Unfortunately, Lucy does not agree. She does not want to marry this man she met once when she was just a young child, but agrees to go to Scotland and meet him. Of course there are many trials along the way to their love and marriage.

At the beginning of the story, I did not like Lucy very much. She was rather spoiled and a bit haughty. I quickly saw that she was frightened and was actually a very nice person. She cared about others very much, but her ingrained sense of propriety tended to come across as her thinking she was too good for the Scots. She was also not sure what to expect due to what she had heard from others over the years about the “Dirty Scots”. Alex was also a great character; strong, handsome, a fierce warrior, and a determined protector of his people and those he loved. It was a good story learning how they dealt with the trials they came across in their travel to love. They do have chemistry and they work well together, when they actually talk and listen, and they both become not only resigned to the marriage, but look forward to it as well. When the villains show up to derail the burgeoning love affair, there are some battles and gallantry with good triumphing over evil. I loved the ending, simple yet sweet. There are a couple of sex scenes, mildly sexy, but not overdone. I am definitely looking forward to the next book in the series to see who Magnus ends up with and what the rest of his story brings. The narration in the book was not bad. All the men sounded the same but I did enjoy the accents and the language. I would definitely listen to another book using this Ruth Urquhart as narrator.

About the Author: Jennifer Trethewey is an actor-turned-writer who has moved her performances from the stage to the page. In 2013 she traveled to Scotland for the first time, where she instantly fell for the language, humor, intense sense of pride, and breathtaking landscape. Her love for Scotland was translated into her first series of historical romance novels, the Highlanders of Balforss. The sexy, adventurous first book of the series, Tying the Scot, is set to be released in November 2017.

Trethewey’s primary experience in bringing the imaginary to life was working for one of the oldest women’s theaters in the nation, where she was the co-founder and co-artistic director. Today she continues to act, but writes contemporary and historical fiction full-time. Her other loves include dogs, movies, music and good wine. She lives in Milwaukee with her husband.

6 thoughts on “Tying the Scot (The Highlanders of Balforss #1)”